At the end of my last post, I had seven adult chickens in my chicken tractor, and nine new chicks in a temporary brooder.  The brooder is literally just a storage container with a heat lamp hovering above it in my garage – because 1) I’m busy and 2) I’m cheap.  Cheep cheep.

I’ve been planning for some time now to build a glorious permanent coop and spacious chicken run that is split into four quadrants.  I’ll rotate the chickens through each of the run quadrants, so that they’ll eat everything in sight in one section, then move through the others while vegetation grows back.  At the same time, my plan is to allow one quadrant to double as my garden (or a portion of it) because the chickens will fertilize it and because I plant to cover it with netting to keep birds out of the run anyways.  The garden would move through each quadrant as well, so the the chickens could eat the old plants and scratch at the dirt, basically tilling the soil, composting and fertilizing it for me.

But that’s the future plan.  Immediately, I had nine chicks crawling on top of each other with nowhere to go.  To make matters worse, I was out of town here and there, so I was constantly just figuring out what to do with them immediately, rather than long term.

They were ok for a while.  Early on, they need to stay warm anyways, so they would be fairly cuddled up even when they didn’t have to be due to space.  It didn’t take long for them to simply have nowhere to go, though.  And a couple of them figured out how to get out of the brooder (which had some chicken wire laid on top to give the false sense of a ceiling), so I’d sometime find a chick on the outside looking in.  They’re extremely territorial, so even when they escaped, they really just wanted to get back in, which was prevented because of the chicken wire.

My first bright idea was to put them back in the chicken tractor with the adult chickens, since they were a little older and I thought they might be able to fend for themselves.  Not a good idea.

I came back in the evening and two of them were gone.  I assume they ventured too far away from the flock (or technically, the clutch of chicks) and were a predator’s dinner.  But even worse, two of the chicks had been shown who was boss in the chicken tractor…

Yes – you’re looking at that right.  One (or more) of the other chickens took the skin right off of it’s head.  I’d like to think they were just getting a jump on preparing a boneless, skinless chicken breast, but the reality is that they were simply laying down the law.  I found that one balled up in a corner under the ‘stairs’ up to the coop, terrified.  The pecking order is real, folks.

I felt terrible, and wondered if the little guy (or girl – I can’t tell) would make it through the night.  Luckily, it did!  By the next day, its head was fairly scabbed up and healing well.  I frantically searched for another broody box so I could separate the two wounded birds so that they didn’t get sick, then infect the other healthy chicks. 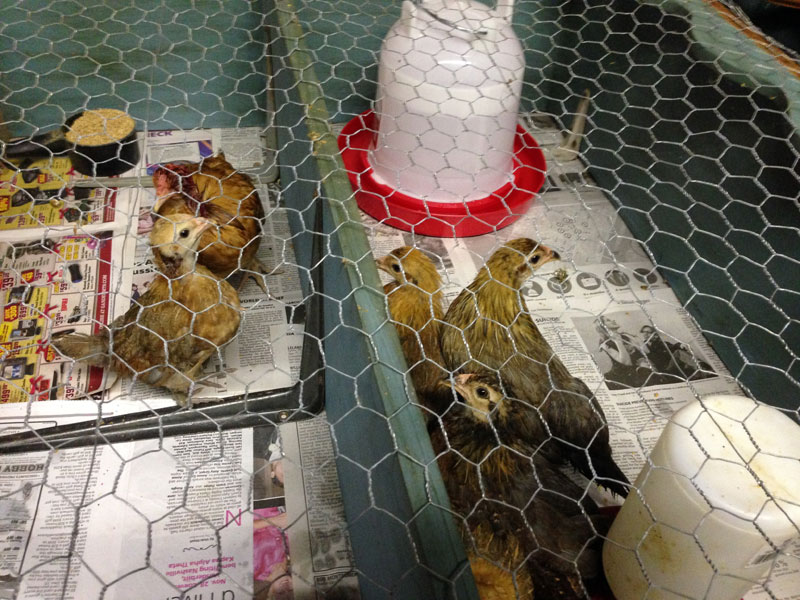 I found a shelf that I had taken down from the garage, threw some newspaper down, and laid the shelf on the ground.  It gave them probably ten times the space, but they were just chirping at each other, hoping to be reunited.

As they grew, I knew that my temporary pen was still…  temporary…  I kept putting off the eventual permanent coop, and trying to figure out what to do in the immediate timeframe.  I even tried to let them outside again – not necessarily into the chicken tractor with the others, but just outside to roam free.  Unfortunately, the same scalping occurred, and I knew i couldn’t do that again.  But, man, were they stinking up my garage. 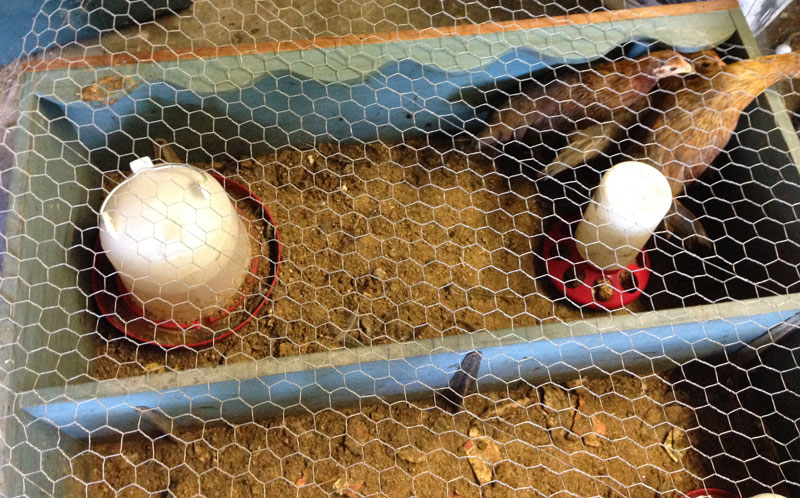 I ended up building a step between the brooder and the chicken tractor, which was pretty much just a fenced in run without a coop.  It was a simple frame with chicken where stapled around it, with a piece of wood laid across the top to give them a little shelter. 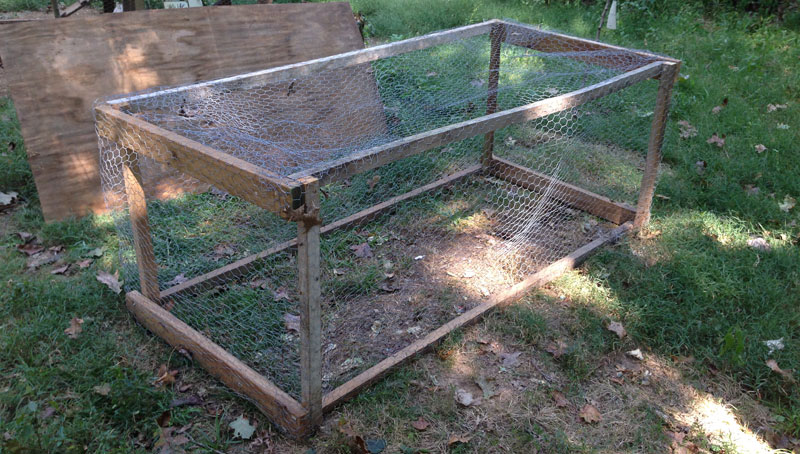 Apparently, I didn’t staple the chicken wire enough, though…  After the first night in their new outdoor home, I found remains of two of them where a predator had pulled them through the spaces between the wire and wood.  Well – one of them had been mostly dragged through the spaces, while the other laid decapitated in the corner.  That’ll teach me to think “close enough.”

I stapled every inch of the chicken wire to the wooden frame, and assumed all was well for the remaining five chicks.

The next morning, however, I came back out to the same sight – the only variation being that two had been pretty much eaten through the chicken wire.  Whatever had done it (I think a raccoon or a possum, because of opposable thumbs.  I’m betting on raccoon.) had grabbed them in the corner and probably munched one what they could, even with the wire separating them.

If I were a chick in this redneck run, I’d be terrified to close my eyes.

I assumed the reason the predator got the chicks is because the chicks gather in the corners of the frame, so it had to be easy for them to reach in their hand for their dinner.  The other chicks would have basically blocked in the victim – and chickens are surprisingly calm at night.  I’ve had very skittish birds allow me grab them with no trouble after the sun went down.

So – I stapled feed bags all around half of the frame, so that the chicks could gather in a safe, covered portion.  No way anything would happen now! 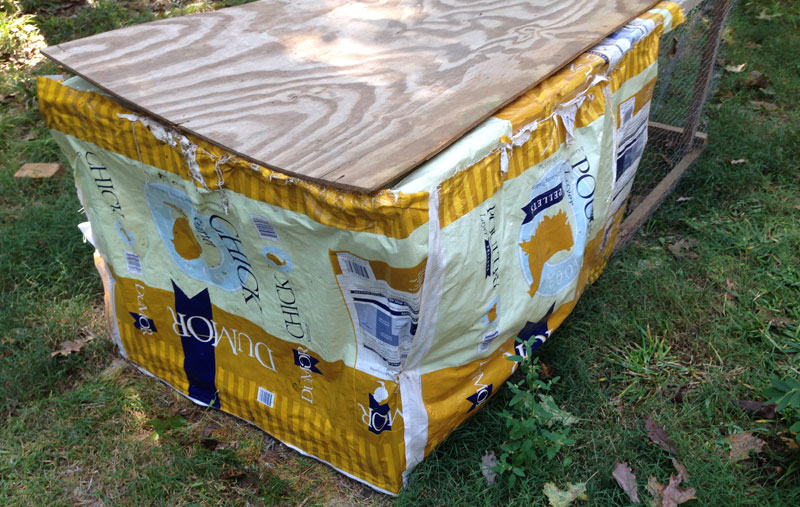 Wrong.  The predator returned and literally peeled back the corner of a feedbag as if it were tupperware, keeping his leftovers fresh from the evening before. 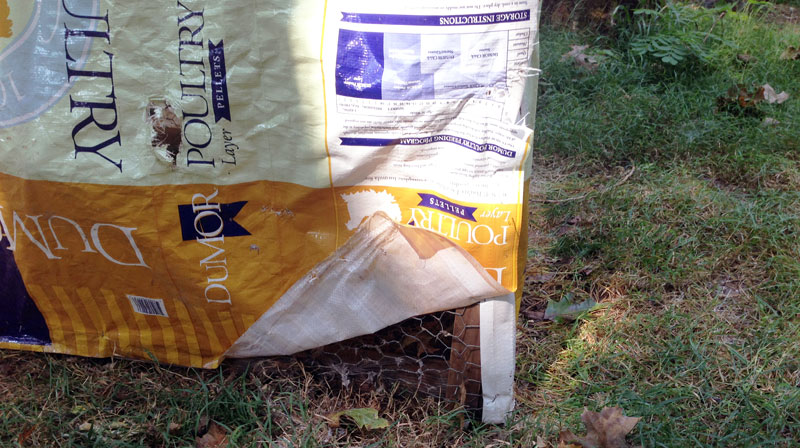 I was down to two chicks.  I then thought I was losing them because chickens generally roost at night to avoid predators, and I had no roost.  I figured I could add a roost so that they would stay away from the corners, and the predator wouldn’t be able to reach them. 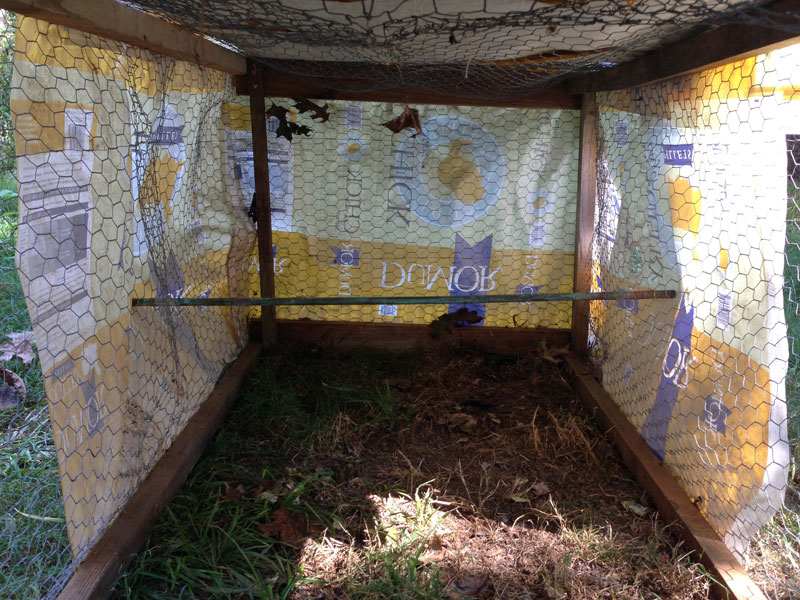 Nope.  The next morning I was down to one chick.  For some reason, the newly deceased chick was drawn to the edge of the frame instead of the safe metal pipe in the middle of their covered shelter.

I decided I need to completely rethink my temporary run.  And for the time being, because the other chickens had been around the chicks for the last few days and had gotten used to them, I figured it was time to put the last remaining chick in the chicken tractor.

This worked.  It was obvious that he was an outcast, but there were no blood-drawing fights. Anytime I went out to check on them, the others were out and about, enjoying the cage-free, free-range, non-GMO bugs that were available to them.  The chick, however, would be pacing inside the coop, wondering when the monster’s claws would find  him.

A few days into him integrating into the coop, I thought I would help nudge him outside to enjoy the benefits that the others already knew.

That was the last I saw him.

But hey – I’ve got a couple chicks going broody again!

4 thoughts on “Unexpected Chicks! Part Two: The Bad and the Ugly”