Dang, y’all.  My last post was from January 7th – over ten months ago…  Since you’ve all been nervously anticipating this entry for so long, I’m sure your expectations have been growing with each passing day.

“He must be crafting a masterpiece of a blog post since he’s taking so long!  It’s going to be amazing!”

Let’s go ahead and dispel any of those thoughts now.  It’s going to be mediocre.

Before moving on, let me tell you why I haven’t posted in a long time:  I wrote two more novels!  One, The Dirt Walkers, is the sequel to my first book, The Surface’s End.  The other, Victor Boone Will Save Us, hasn’t been released yet – I’m sending it to Literary Agents to see if I can get any bites.  If not, I’ll self-publish early 2017.  I also wrote and recorded a bunch of songs, have gone to a bunch of Comic Cons to sell my books, acted in some short film projects, and probably some other stuff I can’t think of right now.

But let’s be honest – you’re not here to hear about my normal goings-on.

Off-Grid related, I got two more beehives (lost one), sixteen speckled sussex chicks (lost seven), and two dogs (still have both of them).  Also did some experiments in solar panels, aquaponics, a mini-foundry, and using a indoor grow light.  Hopefully I’ll post about those things soon, especially now that it’s finally getting colder and we’ll all spend a little more time inside.

What You Came Here For

I’ll just act like I needed to let my acorn flour “age,” over the last ten months.

In case you don’t remember where I left off, I made two tiny batches of acorn flour, one processed with the skin on the nut meat, and one without.  After looking at them for a long time and realizing just how small of an amount I had, I decided to combine them.  I mean, seriously – there was no possible way I was going to be able to do a taste test to tell the difference between which had skins and which didn’t.  Besides, the biggest test was to simply see if this acorn flour thing was any good at all.  That said, I put them together, ground them again in my designated coffee grinder, and ended up with a whopping 3/4 cup. 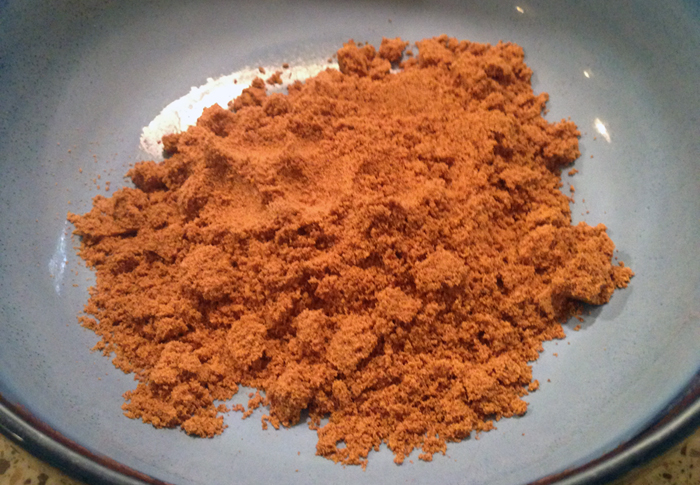 I was pretty sad that’s all I came away with, especially because I had grand plans of using numerous recipes to finding the one.  Instead, I split it three ways, leaving me with three bowls of 1/4 cup each.  That way, I could possibly try three tiny recipes to test it out.

I scoured the interwebs, and unfortunately almost everything I found called for acorn flour AND wheat flour – usually more wheat than acorn.  That felt stupid.  The whole point of this experiment is to see if man can live on acorn bread alone (which, I already know isn’t true), not simply add a little acorn flour to an existing recipe for flavor.

I finally found another brave blogger who apparently had the same concerns I did.  As I looked at the first recipe for short bread on her page, I noticed no wheat flour.  Success!  I was just about to start gathering ingredients, but decided to read down the page a bit.

Good thing I did, because apparently her first recipe ended in disaster.  Not like the-kitchen-exploded disaster, but in the sense that the resulting short bread was so bad that she almost gave up on acorn flour in general.  Three cheers for my elementary school teachers who always taught me to read ahead.

Luckily, the second recipe – this time for chocolate chip cookies – ended much happier.  And so I pressed on.

I wanted to compare acorn flour to wheat flour directly, so I decided to try two batches that were exactly the same except for the two different flours.  The recipe (at the bottom of this post) called for an exorbitant amount of acorn flour – 1 cup!

Since I would only be working with 1/2 cup of flour in total (1/4 acorn & 1/4 wheat, separately), I followed the recipe with half-amounts until I needed the flour itself.  Since it called for an egg, I literally whisked an egg, poured it into a some fancy Pampered Chef measurement tool, then poured half into my concoction.  I threw the other half away, because I didn’t know when I’d ever need half an egg again.  After cleaning the fancy measurement tool, I used it again to get half of my overall batter (a fourth of the total) into two separate bowls. 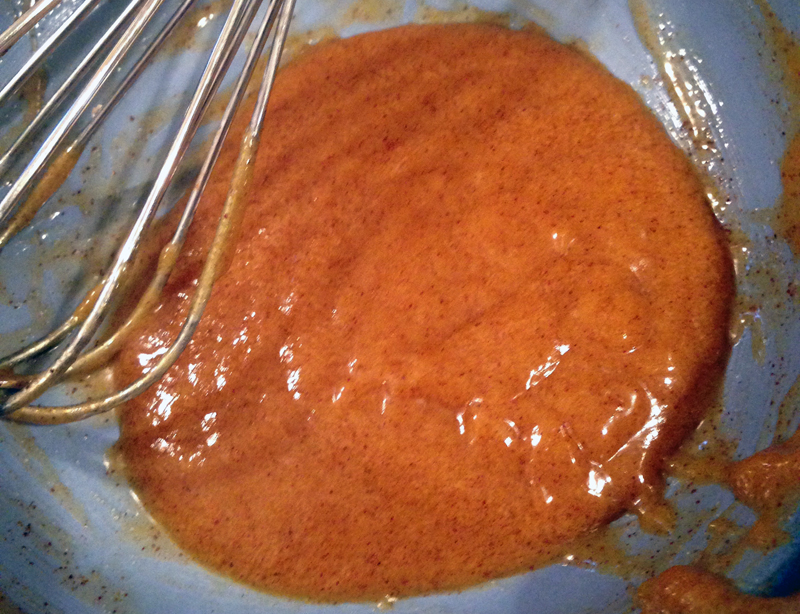 Don’t be fooled by the picture – that’s a close up of a half of a half of the recipe.  The whisk is actually tiny – it came from a hot chocolate mix we got from a friend.  I use it a lot for individual omelets because it’s so small.  Our big whisk basically requires a five-gallon mixing bowl.

Then, enter the two flours plus 1/4 teaspoon baking soda. 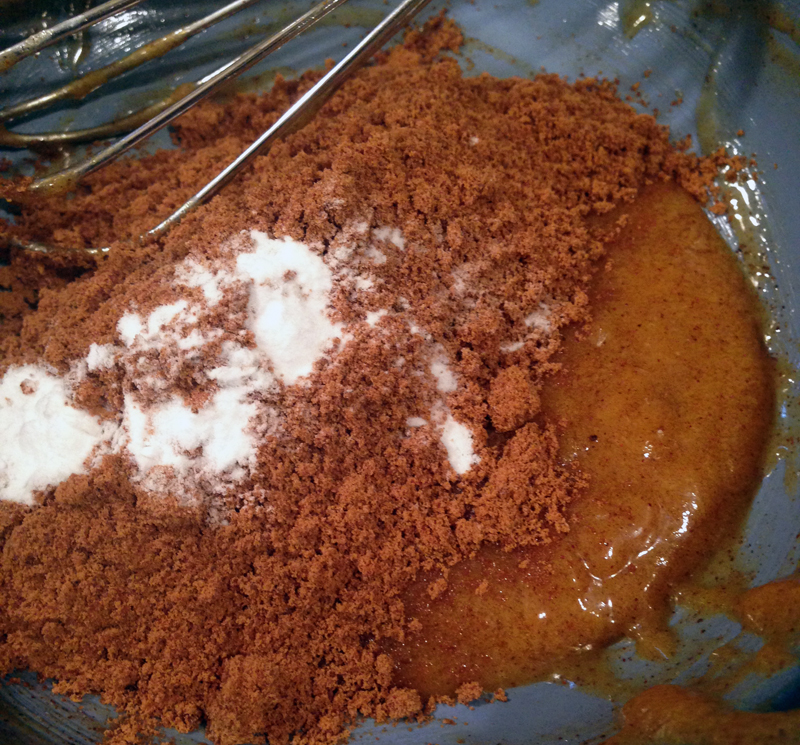 The baking soda is the white stuff, in case you couldn’t tell the difference. 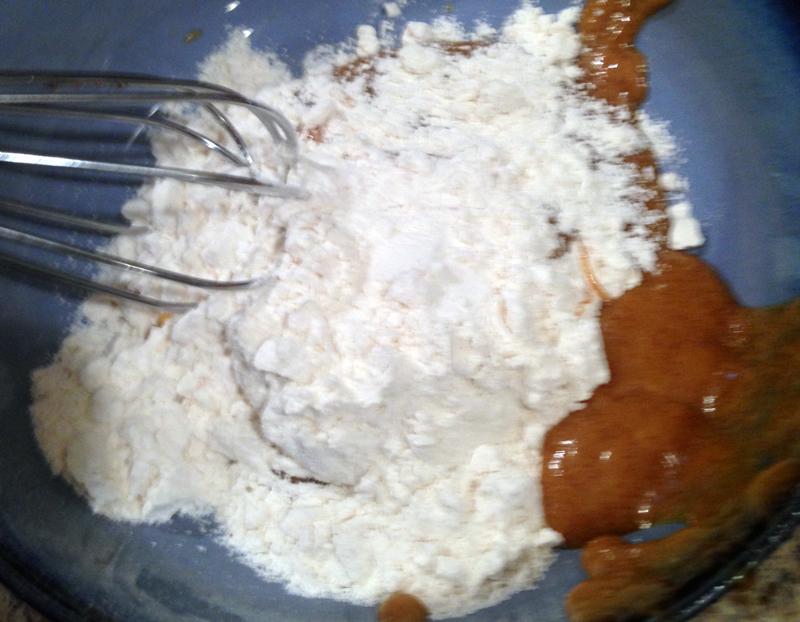 Don’t blame my photography skills – the wheat flour is actually out-of-focus by nature.

A little bit of chocolate chips later (forgot to take a picture), the results were on a cookie sheet, ready to bake in my laboratory. 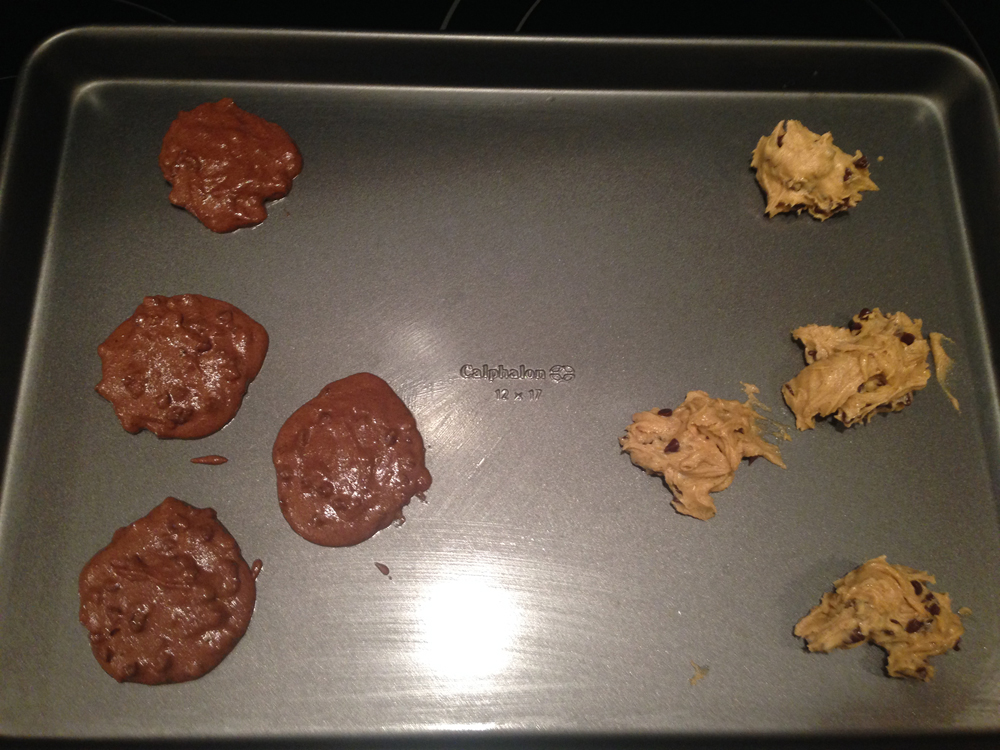 I made sure and wrote down that the acorn cookies were on the left, because I was sure to mix them up after they were done, am-I-right?  Also, I’ll be waiting for my advertisement check from Calphalon®, since they’re featured as much as the cookies.

Beside a drastic difference in color, the wheat cookies stuck together much better.  The acorn cookies were basically scooped and poured onto the cookie sheet, and spread out evenly without my permission.

Because we have a convection oven, I almost never wait the full amount of time that recipes call for, so ten minutes later… 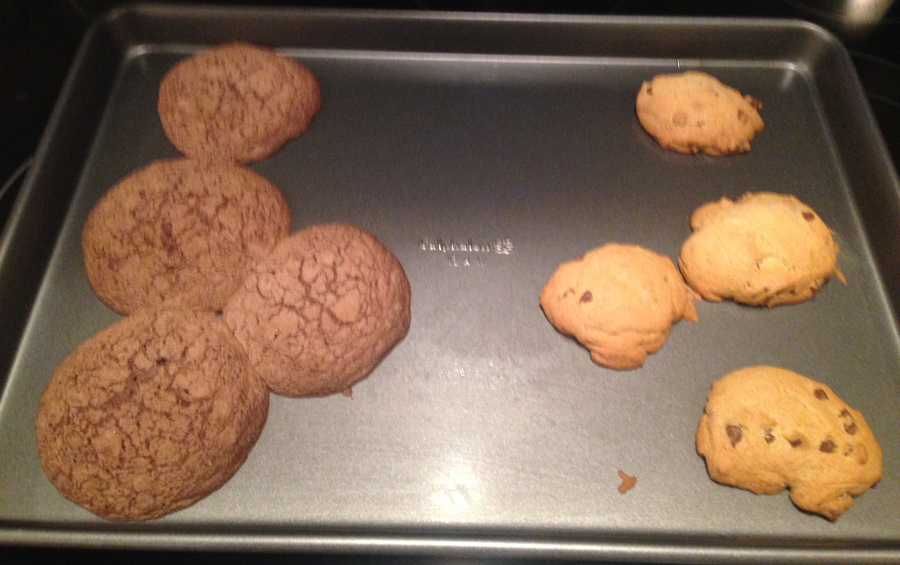 Consistency wise, the acorn cookies continued to even out as they baked, whereas the wheat cookies rose an kept their awkward shapes.  I should’ve spread the wheat cookie batter out a bit, because they were cakier, resembling more of a short bread – but I’m no baker.  Or – I guess I am?

But how’d they taste?

Great!  The acorn flour brings a mild nutty flavor to them, and one person actually asked if there was more chocolate in them than in the wheat ones.  (I think that’s partially because your eyes play tricks on you, considering the only time I’ve eaten similar-looking cookies they’ve been completely chocolate.)

Don’t take my word for it – I had three other people besides myself eat them, and two of them said they actually preferred the acorn cookies to the wheat ones.  The other didn’t say they didn’t prefer them – they just had their mouth full.

Overall, I consider it a huge success.  I still have a half a cup of acorn flour waiting for more recipes, but I’m already inspired to gather some more acorns and try the whole thing again.  After all, it’s been a year, and I’ve forgotten just how much of a hassle the whole thing was…

Cream butter, sugar, salt, cinnamon and vanilla together. Add egg and mix until the batter is lump free. Add  flour and baking soda and mix just until the flour is completely moistened. Add chocolate chips.

Drop 2 inch balls onto cookie sheets with plenty of room for the cookies to spread out.  Bake in a preheated 350º oven for 12-15 minutes.

1 thought on “The Other Brown Flour (Part 2): Baking with Acorn Flour”