I grew up in the country, and just like every other average American kid I had my share of pets.  There were dogs, cats, fish, hamsters, squirrels, a leopard gecko named Yoda, and more dogs and cats. 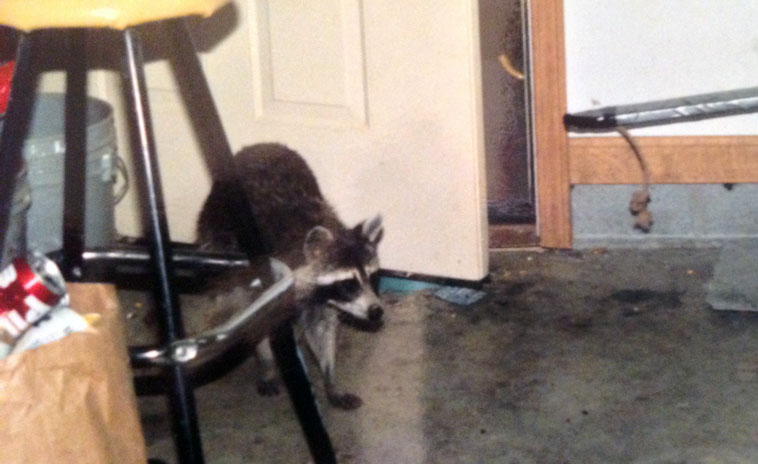 Don’t all kids have raccoons?  They’re absolutely awesome, so all kids should have them.  They purr a lot like cats, and are much more social.  Cats are jerks, and only care about you when they want to.  I don’t remember our raccoons ever walking just out of arms length, then sitting down to mock us while we stretched out to try to pet them. 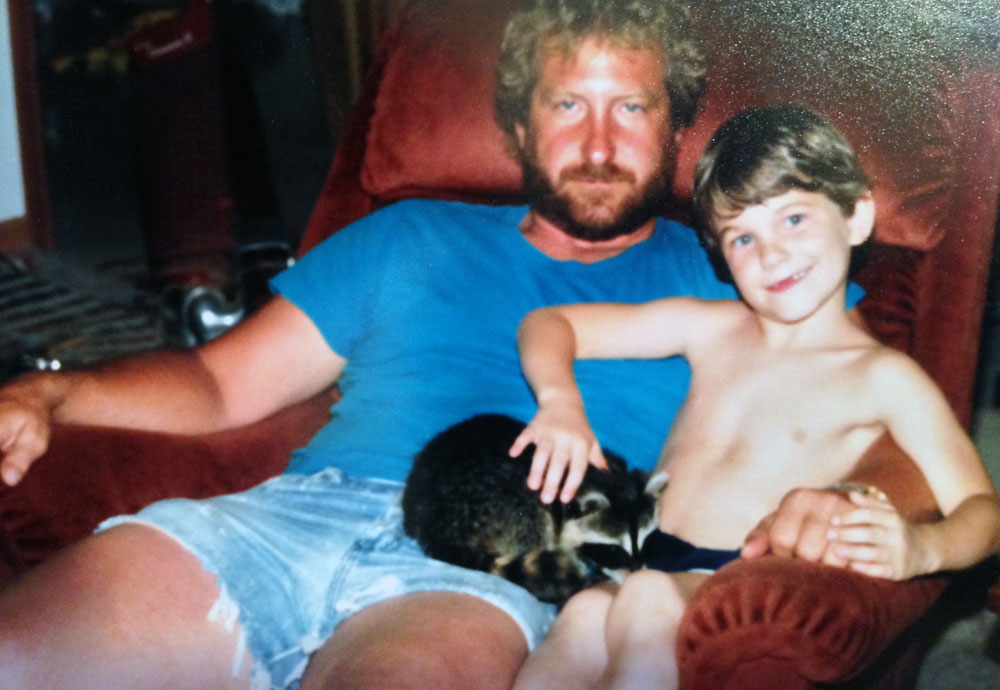 I think my dad isn’t smiling because he’s super embarrassed by how short jean shorts were in the 80’s.

I don’t remember the timeline, but I had pet raccoons at several different points in my childhood.  At one time, we had four that were fairly young.  They were in a cage that my dad built, and we’d have to move the cage every once in a while because they would start digging their way out.  One morning, though, they were gone. My mom said that she watched the mommy or daddy raccoon come several mornings to try to dig them out, and she was watching the day that they got away.  She said she felt so sorry for that raccoon mommy or daddy, knowing how hard it was trying to get it’s babies back, so she let them go. 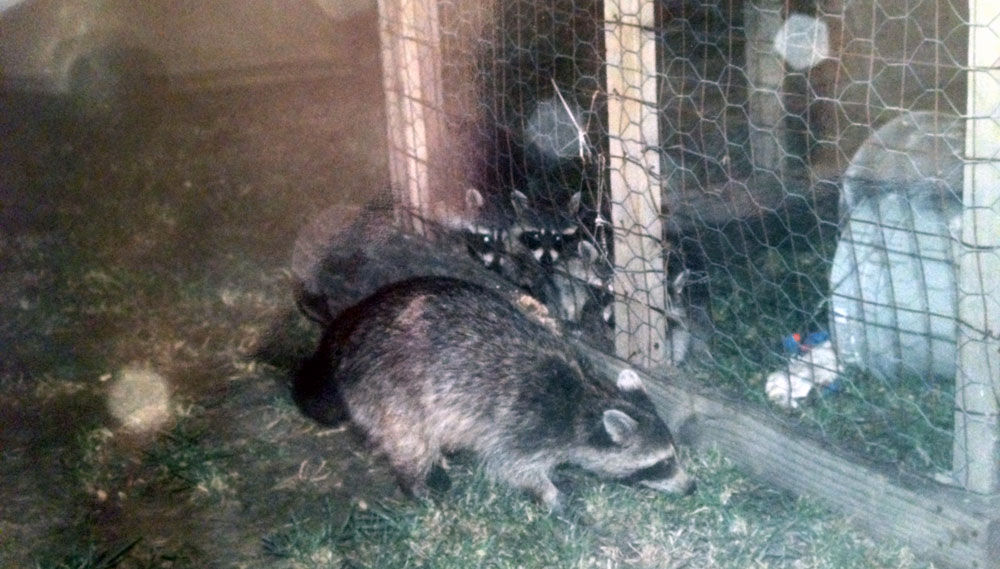 Apparently my mom even took a picture of the four little rascals getting away!

Forget the precious momentary connection between and human and raccoon parent, and the unrelenting love for their furry children…  I wanted my pets!

I got over it eventually, though – probably because we had another pet raccoon soon after. 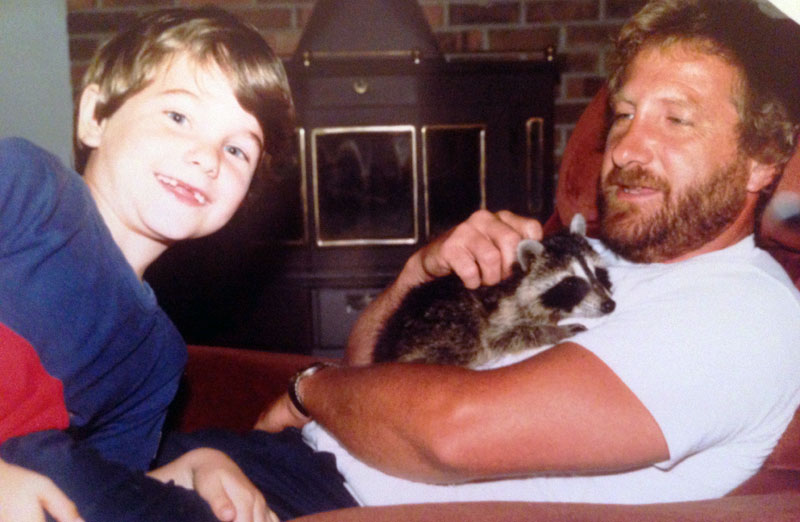 I got a little raccoon crazy around that time, doing a school project on them, which included going to school with a tail and mask.  I thought I remembered a random fact from third or fourth grade – that raccoons have no salivary glands – but I just googled it and found it to be false.  Don’t judge – we didn’t have the internet back then.  They often dip their food into water, but apparently that mostly only applies to raccoons in captivity (which ours obviously were).  The German word for raccoon is Waschbär, which literally translates to “Wash Bear.”  I also did a school project on Germany.  And on UFO’s, but that’s beside the point.

Anyhow, this is all a really long setup to a much different, darker story.

A couple raccoons have been hanging around our house at night, eating our cat food.  You might wonder how I knew it was raccoons that were eating the food…  I know because we would flip the lights on and stare at them from a foot away through our kitchen window, and they would just look at us like we were waiters asking how their meal was going.  “Needs more water,” I could hear them say. My wife didn’t like it one bit because she has a soft spot for our cats.  Because of this, I’d try to sneak out a different door with a BB gun to scare them off.  Usually, they’d hear me approach before I had a clear shot and would run off – but there were the occasional times that I unleashed the fury of my 1991 single-pump Daisy.  The gun is apparently strong enough to kill woodpeckers (oops!) and carpenter bees (that’s right – they call me eagle eye), but it’s only enough to freak out an unsuspecting larger animal.

They’d usually just come back thirty minutes later or so, after all the lights went off in the house.

When they really started bothering me, though, is around the time my chicks started disappearing.  It’s one thing to eat our cat food; it’s quite another thing to eat our chickens.  I wouldn’t have have minded it as much if they just ate our cats instead – those guys are freeloaders, and don’t give me any eggs.

So, one night I again went out with my Daisy BB gun, this time staying far enough back to make sure I could get a good shot off.  I assumed that if I could shoot it square in the face, it would be a little less brave approaching our house.  I stood on a chair to line up the shot and…

Bang – right in the face.  And it was the cutest thing ever.

The raccoon looked up in my direction; it couldn’t really see me because the light was in it’s eyes and I was still in the shadows.  It raised it’s hand and rubbed it’s head in a “Why would you do that?” kind of way. But it didn’t run away.  So I pumped again, and shot it once again.  Still, it just looked out in the shadows, wondering what in the heck was going on.  I shot it again and it finally ran off.  Cleary, the Daisy wasn’t packing as much of a punch as I thought.

I went inside, and less than ten minutes later the little punk was back.  Usually, I would give it a little grace, but this one was just mocking me.  So I pulled out the big guns.

Well, by big guns, I didn’t actually get a gun.  In order to take a shot, I’d have to aim towards the house, and I’m not that confident in my middle-of-the-night-with-the-house-as-the-background target skills.  So I got the next best thing: my crossbow. 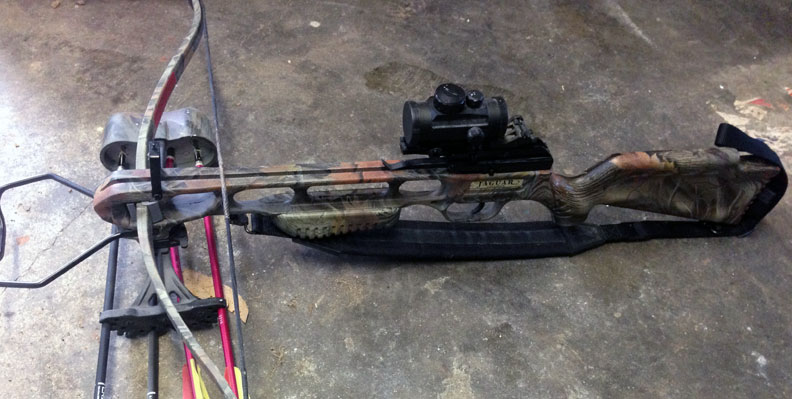 I got in the exact same position and kind of took aim.  Because it was dark and I was fairly close, I couldn’t really use the electronic scope.  There are three red dots in the scope, and choosing the wrong one would definitely embed an arrow into my shed or my exterior wall, so I just judged where it was aimed as if I wasn’t the one holding the crossbow.  X/Y axis sort of thing.  Squeeze the trigger, and…

The raccoon looked up when it heard the trigger, otherwise my arrow probably would have been a direct hit to the face.  As it was, though, it went through its chest, then through it’s gut and out its butt.  It was obviously a little terrified and jumped off the shed attached to the house like it was committing suicide.  It ran out in the woods, limping and scraping the arrow on the ground.

Then I realized that it still had my arrow.

I started following it, knowing that if I lost it in the moment, some other animal would drag it and my arrow away before the morning light.  I used my phone as a flashlight, and following the sad sounds of a dying raccoon, its eyes reflected back at me in the distance.

About the same time, my wife came out to see if I’d gotten it – and I realized there was no possible way I could finish the little dude off with my crossbow – so I sent her to the garage to fetch an axe.  She came back with it, and I traded the crossbow for the axe and made my way into the underbrush. 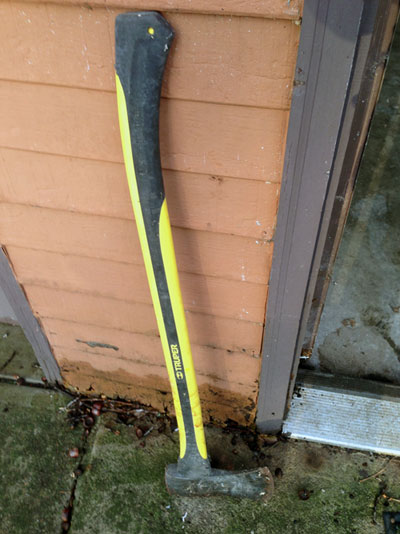 The… other… murder weapon

It was freaking out, and I felt bad because it was definitely suffering.  Still holding the phone-flashlight in one hand, I try to finish the job with a swoop of my axe.  Unfortunately, a one-handed axe swoop while the other hand holds a flashlight is not very accurate, and I pretty much just chopped at it enough to insult it.  So I turned the axe around to bludgeon it until it was gone.

It was sad, and I felt pretty bad because I like raccoons.  I was also sad because the meat was so messed up that I wasn’t even going to attempt to clean and eat it.  But something enjoyed it, because the next day I came out there and all that was left was a puddle of fur.  (I should have gotten a picture of that, but didn’t think about it until later)

The other raccoon learned its lesson, apparently, because it stayed away for a long time.  It has recently been showing up again, though.  Which stinks, because I really do love raccoons. 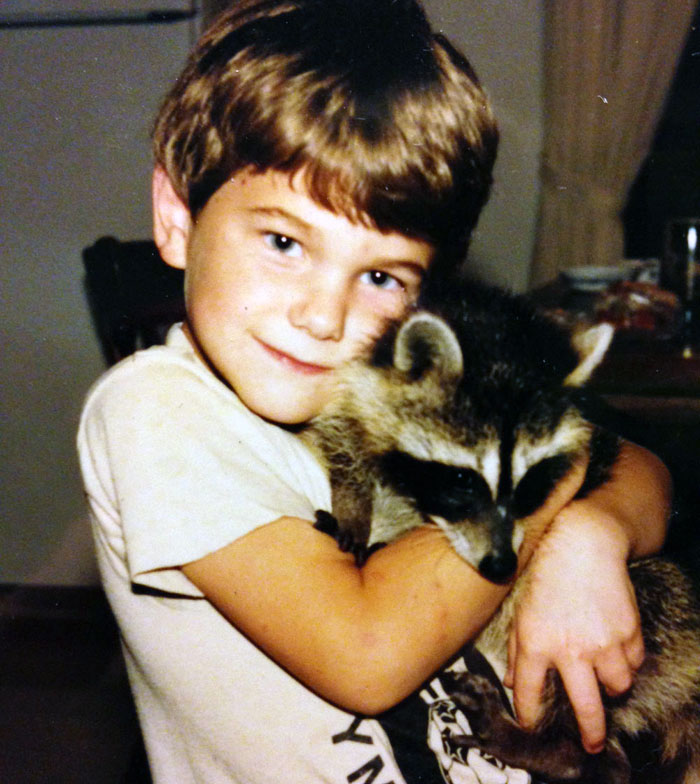 8 thoughts on “Keep the Change, Ya Filthy Animal”