Taking eggs from chickens is a little strange when you think about it.

Obviously, an egg forming in a chicken’s body and then ending up on our plate is magical or whatever, but I’m talking about the actual experience of getting the egg.

My small coop has three nesting boxes, so anytime I swing by, I lift the little roof I made over the boxes to see if there are any presents for me.  There’s always a lot of poop, often some eggs, and usually a chicken screaming at me.

Think about it…  It’s as if you’re minding your own business, sitting in a public restroom, when the entire ceiling lifts up and a giant peers in each of the stalls.  I’d scream, too.  Creep.  But the screams don’t seem to deter him – he awkwardly keeps looking, completely disregarding your personal space.

Even weirder, the giant grabs something that others have left in the stalls.  And you know that he’ll come back for what you leave as well.

Sorry – this is simply where my mind goes.

I’ve had a number of chickens go broody over the summer, which I did not anticipate.  If I haven’t already said it, a broody chicken is one that simply wants to sit on eggs for the purpose of hatching them.  They’re quite determined to stay there once they start – you can pick them up and move them (as long as you’re not deterred by their screams) and they’ll go right back to the nest.  They will forego eating and drinking for the sake of sitting on the eggs.

At first, I only had one broody chicken.  For a week or two, she sat there by herself, staring at the wall.  I looked up how to ‘break’ a broody chicken and found that it’s difficult, because it’s a hormonal stage.  Basically, the underside of hen heats up, and when she’s not sitting on eggs she wants to be.  In one video I found, a family dunks the belly of a broody hen under chilly water for a few minutes, lowering her body temperature.  Apparently, when the temperature of her belly is lowered, she just forgets that she was broody.

No such luck for me.  After sincerely freaking my hen out (she got me as wet as I got her), and finally getting her mostly under water for five minutes or so, she makes a bee line right back to her nest.  I tried this multiple times, and it never broke her.

Not long after that, other hens went broody.  I only have three nesting boxes, but I’d sometimes peek in to see two or even three hens in one box – totaling four or five broody hens at a time.  Though I don’t know if all of them were truly broody, or if a couple of them were faking to be part of the ‘in’ crowd.  Apparently – like sneezing – broodiness begets broodiness.  Some farmers put curtains over their nesting boxes to prevent non-broody hens from seeing their broody sisters – that way they’re not tempted to join in.

Anywho, eggs need to incubate for twenty-one days before they hatch, and as I was strolling by the coop one day, I heard a few tweets from the coop.  And since they don’t have access to my wifi (#TwitterYolk!), I opened up the nesting boxes to find a cute chick tucked under a hen’s feathers.  The hen was even more scream-y than she was before the hatching. 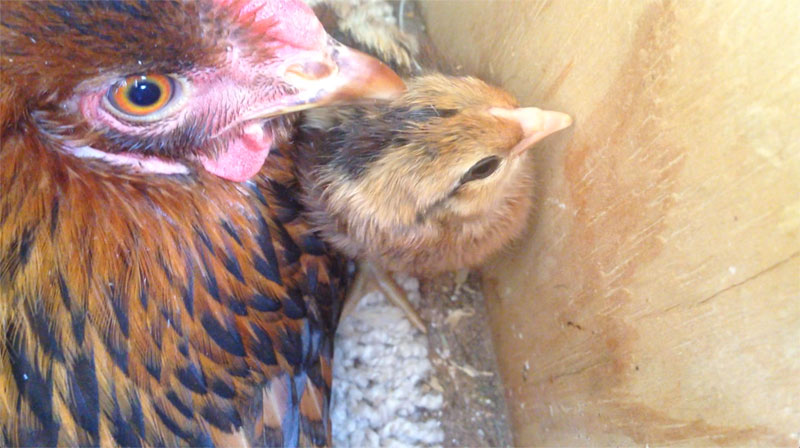 Right before a chick hatches it eats the yolk, so it doesn’t need food or water for a couple of days.  Because of this, and because I figured the hen knew what to do better than I did, I just left it alone.  One hatched chick can encourage the other unhatched chicks just by moving around and tweeting.  Well – as long as the other chicks are following its tweets.  (#AnotherTwitterYolk!)

The next day, I found this! 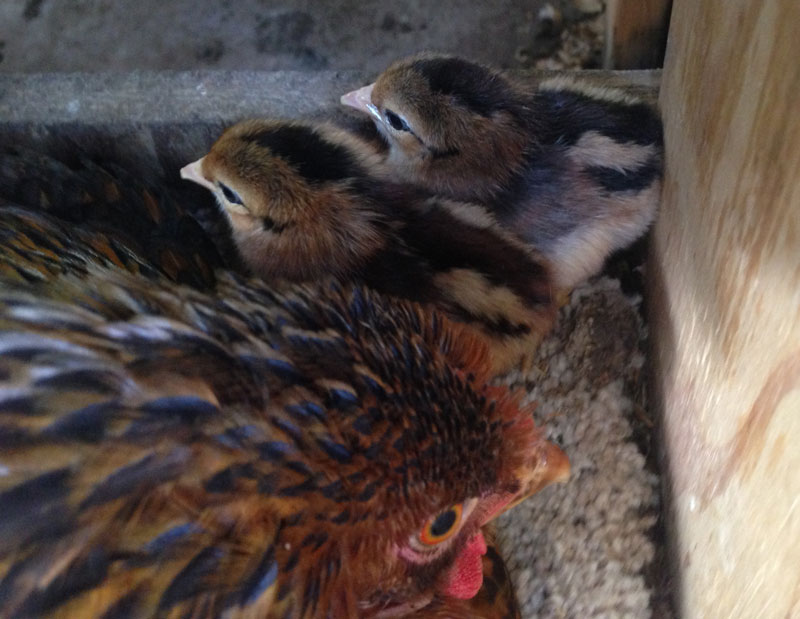 The order of events is fuzzy at this point because it was a few months ago, but another hen hatched two more eggs right within the next couple of days.  Around the same time, I started putting chick feed in the broody boxes, because there was really no other way to get them to eat.  (Side note – the other hen had apparently stopped eating while broody, because its beak was elongated and pointed down.  I put food right in front of her and she had a hard time eating, but the next day her beak was back to normal size.)

The chicks started jumping out of the broody boxes, which caused the hens to also jump down to protect them.  Because there were four chicks and two hens (and one “aunt” – a hen who stopped going broody and was basically trying to act like the mother of the first two chicks), there were some fights.  At one point, I noticed that one of the chicks was bleeding, most likely because the rival hen wanted to show it who was boss.  Because of this, and because I was hoping that the hens could show them how to scratch and eat from the ground, I put them all outside. 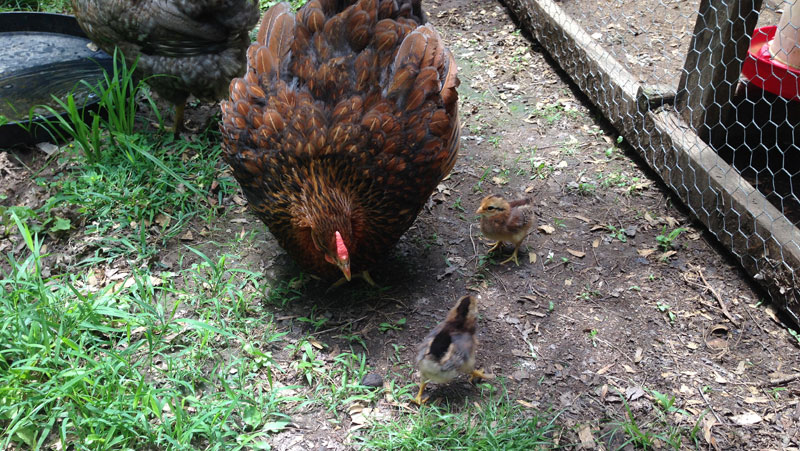 They did pretty well – they were always close to their respective hen, and it was really interesting to watch the hen act out what she wanted the chicks to do over and over.  (By the way, I keep simply saying “hen” rather than mother because the hen who hatched them isn’t necessarily their biological mom.  Whoever is sitting on the egg when it hatches is identified as its mom.  So I might use “mom” from here on out to make things easier.)

All of the truly broody hens had completely abandoned the unhatched eggs because they had to take care of the chicks, so I put the rest of the eggs in my incubator, just in case some were on the brink of hatching.

Because I had to put them back in the coop each night (the chicks specifically – the hens would follow), and then put them outside again the next morning, it wasn’t necessarily the best situation.  There was a little bit of chick feed in the coop, but the adults kept eating that quicker than their own feed, so the chicks were having to fend for themselves.

On top of that, because they’d be awake in the morning well before I let them out, there were still some rivalries and fights that I couldn’t stop.  I ended up putting the chicks in a little brooder box so that I could keep them safe and fed.  And not long after that, two more chicks hatched in the incubator! 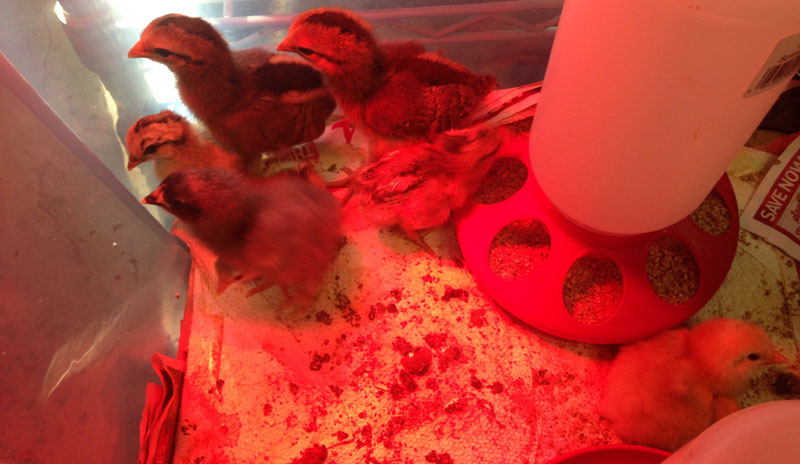 Over the next week or two, three more chicks hatched in the incubator, totaling nine chicks!  I definitely didn’t anticipate having that many…  Heck – I didn’t anticipate even one hatching, because I still only have the one chicken tractor.  I’ve been planning on building a stationary coop for a while, but just haven’t had the time or motivation.

So – I figured as these nine chicks started growing, I’d quickly need to find the time and motivation.  And you’ll have to wait until the next blog post to see if that happened!