For a while, I planned on a new blog post about once a week.  But as it often does, life kept getting in the way.  So, for the next handful of updates, I’ll try to recall all of the special details from past geek-off-grid-iness situations.

Months ago, I got a message from a friend in town who had honeybees in his porch ceiling.  And he needed them gone.

Sweet!  It just so happens that I want honeybees, so this seemed like a win-win-win situation.  I already had most of what I needed: extra hive bodies and the proper equipment need to peek your face into a bee colony.   I bought a couple other things (a queen cage and some lemongrass oil), gathered all of my stuff, and planned on making a day of it.

Sure enough, when I rolled up, there were tons of bees going in and out of the porch ceiling.  Keith said that they were pretty calm and they only sting Jehovah’s Witnesses in the six or seven years that he’d known they were there.  Add me to the list, though, because while I was invading their space (before I had my veil on), one got caught in my hair.  After it panicked for a a minute or so between the forest on my head (i.e., it was nowhere near my bald spot), I thought I’d try to help it get unstuck.  It wasn’t a fan of that, and died in order to let me know. 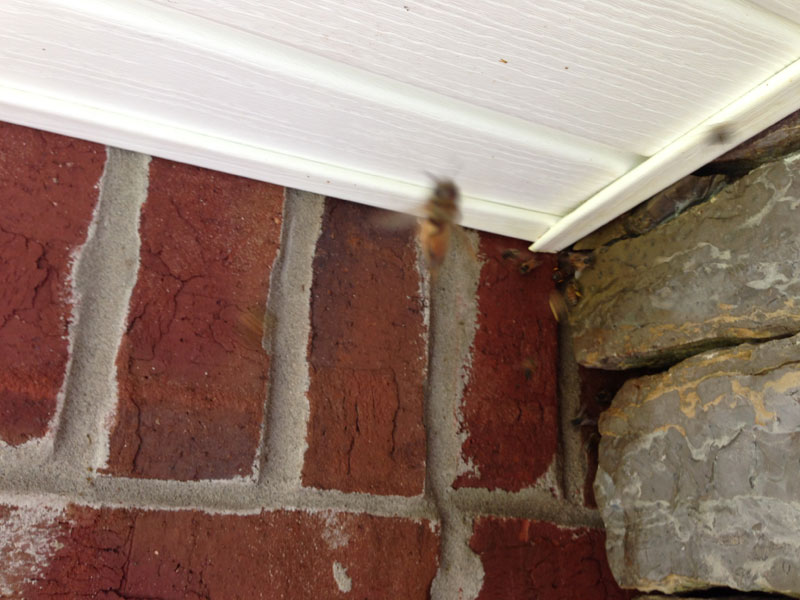 I forgot to get many pictures, but you can kind of see the hole that they were using as an entrance in the corner.  So I removed the soffit, hoping to see a glorious amount of honeycomb, considering they’d been there for so long.  Here’s what I saw instead: 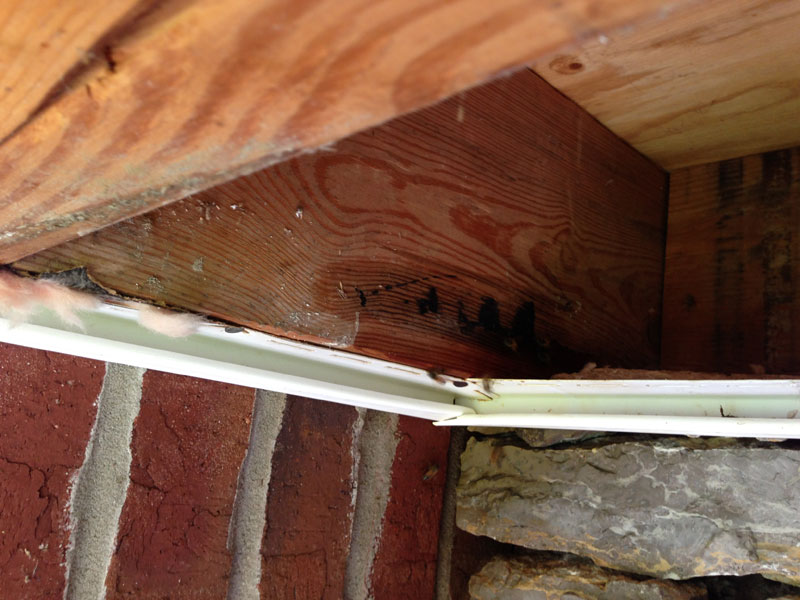 Apparently that was only the gate to their courtyard.  I walked through his house, putting my ear to the ground (literally) and walls, and determined that the glorious honey was somewhere in the floor joists between two bedrooms.  This was above my pay grade, so I packed up and left.  Sad day.  Sting and no honey.  (Which would have been a much better backup band name for The Police)

Since that produced no extra bees for me, I decided to go with phase two: splitting one of my healthy hives.

It’s not rocket science…  Nature does this all the time, and as a colony grows a beekeeper must make sure to give them ample space to continue to store honey.  If they outgrow their house, a new queen is reared and the old queen takes about half of the bees with her to find a new home.  Or – the ’emergency’ situation is that nurse bees start rearing a new queen if the old one dies, disappears, is sick or just not laying eggs like she should.  Splitting a hive is pretty much just forcing a bunch of nurse bees to make a new queen because they’re cut off from the old one.

I took five frames out of my strongest hive – three frames of larvae, one frame of honey, and one empty frame so they could have room to grow – and put them into one of my original Nuc boxes. 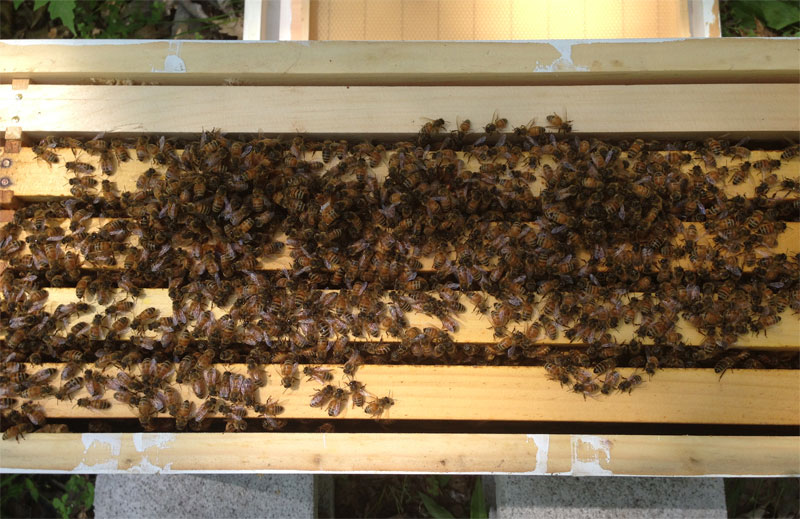 There are a lot of different methods online – but it seemed like the general consensus was that the existing queen simply needed to stay with the old hive.  Of all of the bees that came over to the new hive, a bunch of them would go back to the old hive (just because when they leave the Nuc, they’d fly back based on their memory) and the nurse bees would stick around and make a new queen. 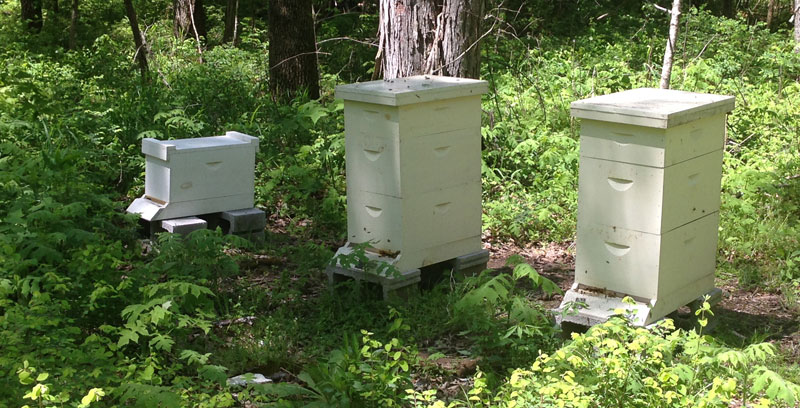 Well, I came back maybe a week later, and the Nuc was pretty low on honey.  I still had a lot of wax from when I extracted my first harvest of honey, and it was probably actually a 1:1 ratio of honey to wax.  I had planned on heating the honey wax to separate them, possibly to make candles or something (and of course eat the honey) – but instead I decided to give it to the honey-hungry Nuc.  Over the next few days, I left this honeywax at the top of their hive, as well as at the entrance.

If I haven’t said it before, bees do not waste honey. 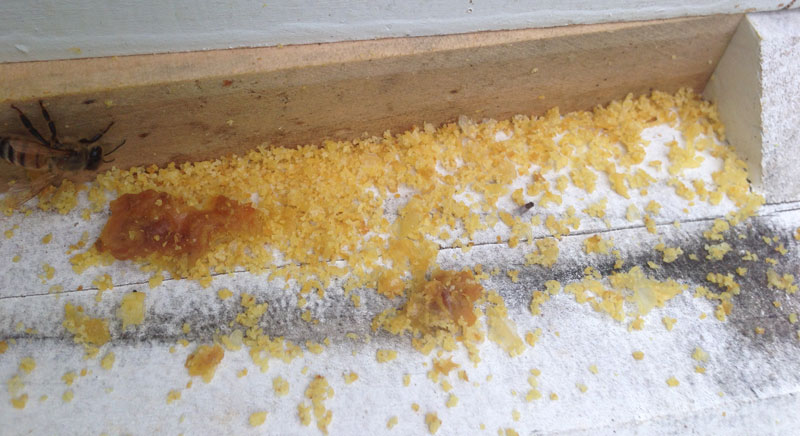 Each time I gave them a clump of sticky-sweet-waxy goodness, I returned to find that they’d sucked every ounce of honey out of it and turned it into dust.  The above picture has just a little bit of honey left (the darker spot by the bee).

Here’s a short video of them incredibly focused on the task at hand:

Anyhow, it was all for naught.  I realized at one point that it was a losing battle, because no queen cells were starting to form.  And as the hive grew weaker (no new bees to take over as the older ones died off), wax moths and other jerks started taking over.  It was a complete loss.

At least the chickens took advantage of the situation, though…

So I tried again!  Exact same method, but this time I noticed three or four in-progress queen cells when I transferred the frames over to the new Nuc.

And the same thing happened. 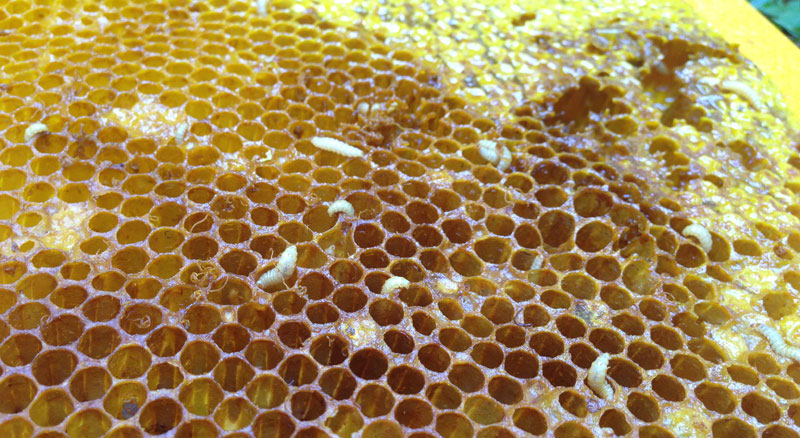 But, even worse: apparently, in all the commotion in transferring frames, the healthy hive’s queen was lost.  I should have thought of that when I took literally all of the potential queen cells out, but I didn’t.  So, when I went back to check the Nuc two weeks later, a once bustling hive was now almost completely empty. 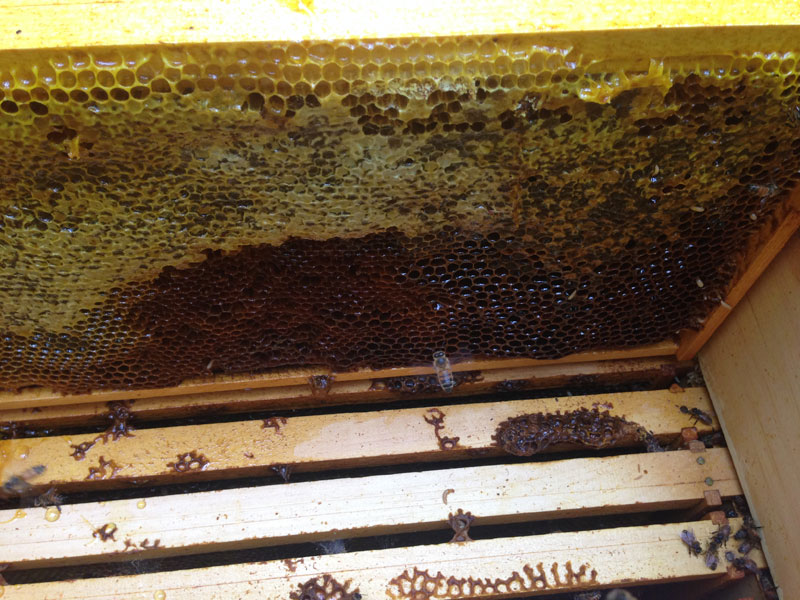 I wish I had good news to end on, but I don’t.  I completely dismantled the hive (it had wax moths and other critters as well, so I didn’t want to combine it with my other still healthy hive) and left it out for the chickens. 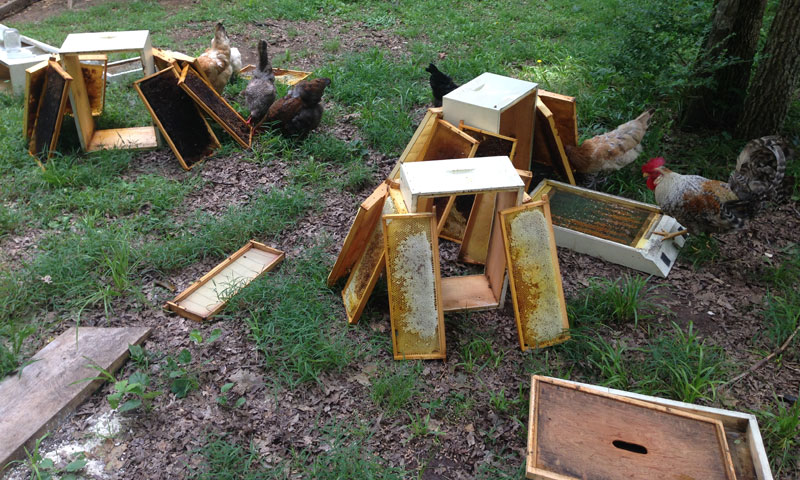 Perhaps the tiniest bit of silver lining is that the other hive found the now exposed honey, and stored it for themselves.  But, they’re not nearly as productive as the hive that I lost, so I’m not even sure they’ve gathered enough to make it through the coming winter.  Hopefully I’ll have good news later! 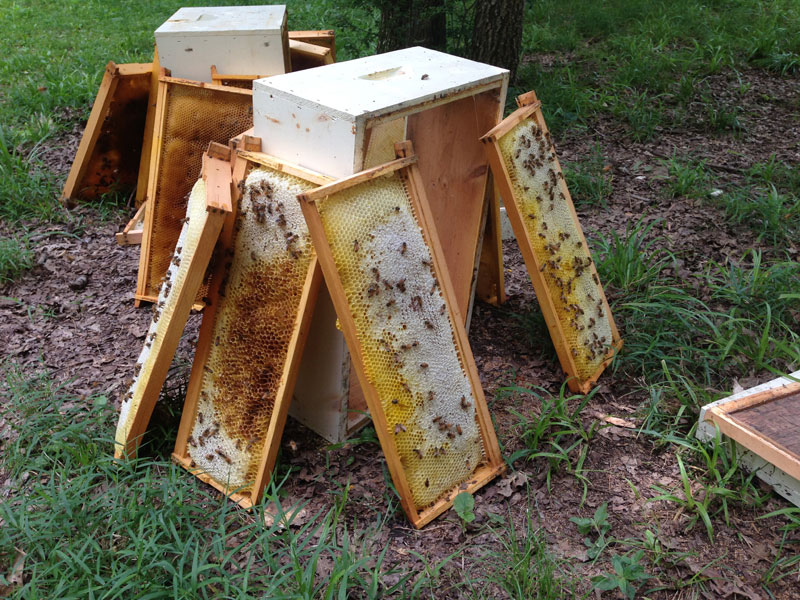 6 thoughts on “Bee Addition and Subtraction”