To make up for the lack of off-grid-iness over the last couple of months, I crammed a few random things in over the last week or so.

To start off, I’d been looking into acorn flour lately…  So, one day when I was planning on going outside to do who knows what, I got distracted by all of the wonderful acorns on the ground.  I thought I’d pick up a handful or so, and make that a ritual each time I went outside, but I got a little obsessive.  I filled all my pockets, and then got a bag  and went back to it because I just couldn’t stop.  I mean – there were so many of them!

Around that time, some friends of ours (who left a jacket at our house) stopped by.

Mitch: Hey David!  What are you doing?

Mitch: ….Oh yeah…  Yeah, I know all about it…  I just love gathering acorns…

(There was a lot of sarcasm in there, in case you didn’t pick up on it through my typing)

I finally realized that I was a borderline psychopath, so I stopped with a healthy amount. 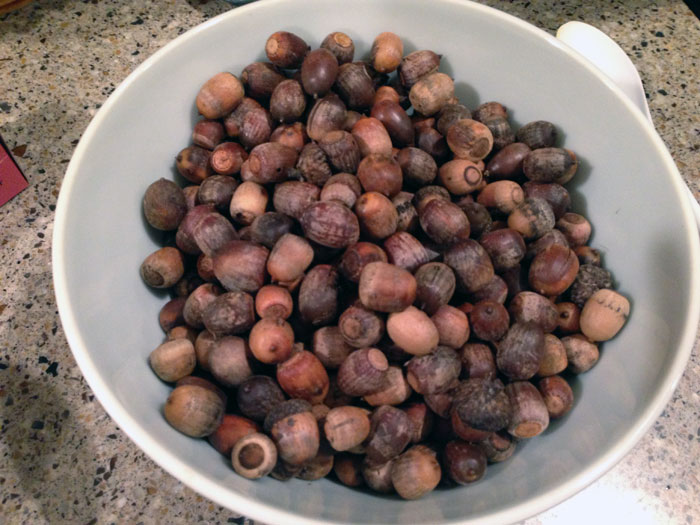 Later on that night, I started splitting them.  I’m extremely glad I didn’t spend any more time gathering these nuts, because almost all of them looked like this: 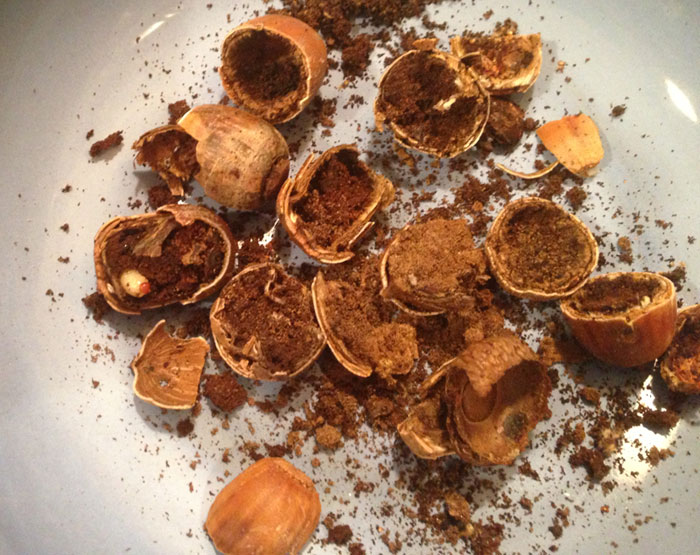 It looks like my worm friend there – and all of his worm friends – got to the acorns before I did.  Instead of finding a nut inside, I found dirt and usually the culprit.  I cut every single shell open, and I had less than a handful that were decent.  And a lot of those were questionable. 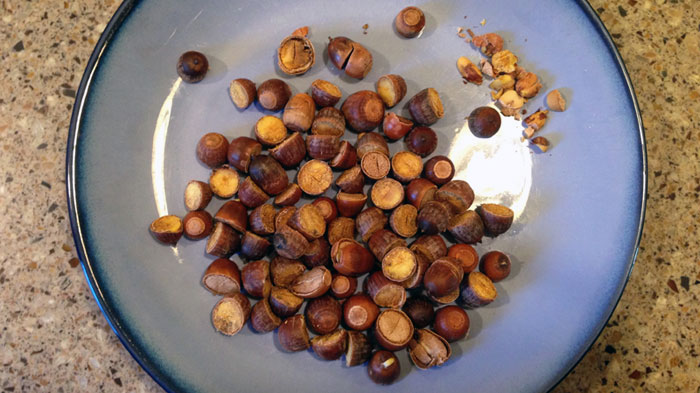 I realized I was probably going to do a ton of work for about a cup of acorn flour, so I decided this might be a project better suited for next year.  When I start hearing them hit my roof as I’m attempting to fall asleep next Autumn, I’ll know it’s time for the harvest.  Then I’ll be a psychopath again.

Later that week, my buddy Andy and I went to visit his friend Todd’s farm.  Andy had been talking to me for a while about it, telling me of all the cool stuff that Todd has going on, and we finally carved out some time to make the trek down.  Andy didn’t know exactly where Todd lived, so we simply followed the map announced on Andy’s phone.

We left the paved road, and then left the gravel road, to what seemed to be a driveway, or perhaps better called a trail.  Thing is, we drove on this thing for at least two miles.  His little Mazda 3 did not like the gigantic water-filled pot holes whose gaps were bridged by old doors.  Yes – someone had taken interior doors to fill in these holes – but the years of driving over them pretty much just made them random splintered pieces of tire-death.  We also passed a sign that said “Stop – Gun Range in Use.”  The sign was not actually up – it was laying on the ground beside the road.  At that point, Andy really started wondering if we were in the wrong spot.  I said “Hey – we’re surely almost at something – we might as well keep going down this road.”  Because – as we have already determined – I’m a psychopath.

Well, the road abruptly came to a steep hill, and he wasn’t excited to see if his car could make it back up said hill – especially if it wasn’t the right farm.  Luckily, there was a bunch of Amish dudes building a house at the bottom of the hill, so I walked down to inquire.

Nope – not the right farm.  But at least it was the amish, and not a live gun range.

After we got back on the road (backtracking the splintery trail), we got ahold of Todd who updated our destination.  Funny enough, Todd’s house is literally right off the pavement.  No off-roading needed.

The first thing I noticed was that his chickens were just about everywhere.  I asked him if he was afraid of predators, and he said his dogs keep them at bay.  (reason #432 why dogs are better than cats)  The second thing I noticed was there were children just about everywhere as well.  I think they have 11 kids, and there were a few friends in tow.  Yowza!

We helped him start some ferments, and had some awesome fresh-from-the-farm cuisine, and just talked about life, God, and everything in between.  Kind of the way I imagine a conversation with a true farmer should go, rather than the distracted dialogue inserted between glances at a phone screen.

The next day, I was planning on doing a little work outside (cutting logs), and I realized – Hey!  I’m better than a dog, right?  I could keep those mangy predators away while I’m outside beside the chickens!

It was hilarious, actually…  The first time in their lives they are given actual freedom, and they pretty much stayed where the chicken tractor had been circling for the last few months.  Specifically, where the ground was down to just dirt and covered with their poop…  Anything familiar, I suppose.

And apparently I’m familiar, too, because anytime I came nearby, they’d all circle around me.  At the time, my wife laughed and cutely said they were following their farmer.  Now I’m wondering if they were simply plotting to take me down.  When I sat down on a stump and sharpened my chainsaw blade, I’ll bet they decided to rethink their plans.

I suppose the cats are following me because I’m their farmer, too. Just kidding. Holly won’t let me eat them.

I didn’t get too far into my wood cutting for two reasons:

That was a pleasant unexpected visit, because I’d just put the Blazer by the road on Thursday evening, and I’d fielded a couple of calls from guys on Friday that said they might stop by Saturday afternoon.  It wasn’t noon yet, but this guy bought it right on the spot.  It makes me excited that I had so much immediate interest, because that means when I put a sign in my front yard that says “Fresh Eggs,” it will be seen.  It also makes me think think I should have priced it higher!  (Only halfway kidding)

With the money from the Blazer, I’m hoping to buy a beat-up diesel truck.  Beat up, because I want something cheap that I don’t worry about getting scratched to pieces driving through my woods.  Diesel, because I want to try my hand at alternative fuels.

Well, sure, I guess diesel is alternative, but I’m talking about making biodiesel from cooking oils.  (If any of my readers have a restaurant and need to get rid of a bunch of used oil, I’d be happy to take it off your hands.  Or – if you don’t have a restaurant, but you fry food for 11+ kids, you probably have plenty of oil.)

Also, at some point earlier in the week I checked on the bees, who have been fairly silent.  I knew they wouldn’t be out and about when it got cold, but I expected to hear them generating heat in their hives.  I got nervous because I couldn’t hear a sound.  Luckily, when it was warmish, I opened them up to find them balled together just like they’re supposed to be.  One hive had bees up in the top super, though none of the comb was drawn out.  The other hive had no bees and no comb drawn in the top super, so I removed it.  I figure they’d prefer to save on their heating bill this winter by not warming a huge empty space.  (For anyone wondering – and I’m sure you all are – there was still a frame or two of undrawn comb in the remaining top box, so they shouldn’t feel claustrophobic)

Also also – apparently my subscribe button wasn’t working there for a bit – so if you tried to subscribe but didn’t get this in your inbox, please try again.  Chalk up another reason why I’m not a fan of wordpress.