I’ve been talking about it for months, but I finally had a chicken killing party.

The party was lightly attended, though – just me and the roo. It was hard to get the interested individuals rallied on a day when we were all free, so I figured I’d butcher the first one alone.

But I’m glad I did, because it took me almost two hours…

In preparation, I realized a week or so before that I actually needed tools to do the job. I found a kitchen knife (that I thought was sharp), and bought a small propane burner at a yard sale.  This is really just my temporary solution – my true self-sustained off-grid plan is to just use wood, but for the time being this will make it easy.

I tied some simple slip knots and threw the thin rope over a branch, so that tiny tree is now dubbed the Killing Tree.  I took a picture, but it’s not great – you can’t tell the rope from the twigs around it – so you’ll have to use your imagination.  It’s far less menacing than you think.

Once you flip them upside down, they’re surprisingly calm.  I’m sure there’s some science behind it, but I just assume it’s because all of the blood rushes to their heads and…  I guess that is relaxing?  If you flipped me upside and started walking towards sharp objects, I’d thrash as much as humanly possible. 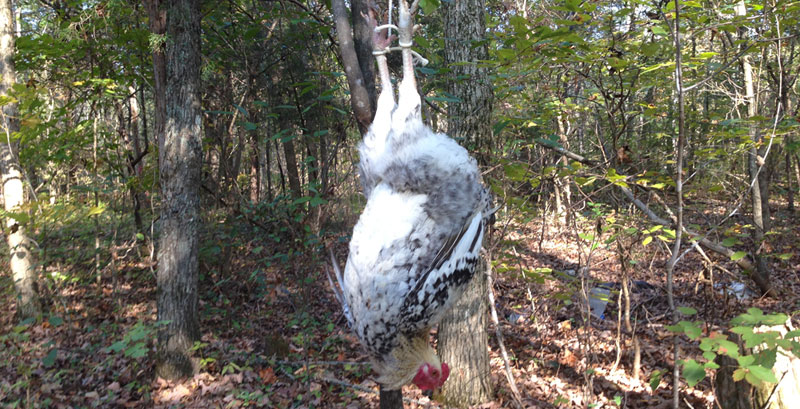 Not much, man – just hanging out. What are you up to?

Unfortunately, the knife I used to “dispatch” my little friend was not nearly as sharp as I thought, so it took me more than one try.

He was a good sport, though, and didn’t mind at all what I was doing to him.  Come to think of it it, he was the most calm he’s ever been, because for the last couple of months he was either squawking at me or maintaining his spot in the pecking order by bullying the other chickens.

After a brief wing-flap near the end of his experience, I removed the head (I threw it in the woods and the cats soon thought I’d thrown a treat specifically for them) and dunked the body into the not-quite-hot-enough water in the not-quite-tall-enough pot.  I didn’t have a thermometer to know what the actual temperature was, so I was just hoping it was around the optimal 145-150° range.  I knew I didn’t want it to be boiling, but also didn’t want to stick my fingers in to see if it was scalding.

As I tried to dunk the body while holding the legs, pretty much the entire lower half was still dry.  I straightened up the legs and tried to force it under water, overflowing probably a gallon of water, with some luck.  I bobbed him like a bag of tea for about ten seconds.  What is supposed to happen, when you dunk a chicken in the hot water, is that the feathers practically fall off.  You pretty much just pet the feathers off.  What happened for me, though, was a lot of tugging and ripping.

At the time, I assumed that was going to be the longest part for me, because it was incredibly tedious to rip a handful of feathers out and then try to pluck out the individual quills that were only sticking out by about an inch after the rest of the attached feather came off in my hands.  I’d dip it in the water again, hoping the next go-round would be easier.  It never was.

I also had to flip it over and try to hold it’s neck to dunk the legs, which was awkward.  And in looking back, I think the “hot” water did so little that I probably would’ve been better off not to have worried about it at all.  Oh well.  As the great Canadian poet, Alanis Morissette, said, “You live, you learn.”

After that, I realized I had no idea what I was doing.  So I did what any homesteader would do – I pulled out my phone and searched on YouTube.  Play a video for 10 seconds, press pause, then try to make the same cut on the carcass.  Second guess cut, because that didn’t look like the same thing that happened for the guy  on the phone.  Rewind the video, watch the same 10 seconds again, realize what I did wrong, but also realize it was too late to fix it. 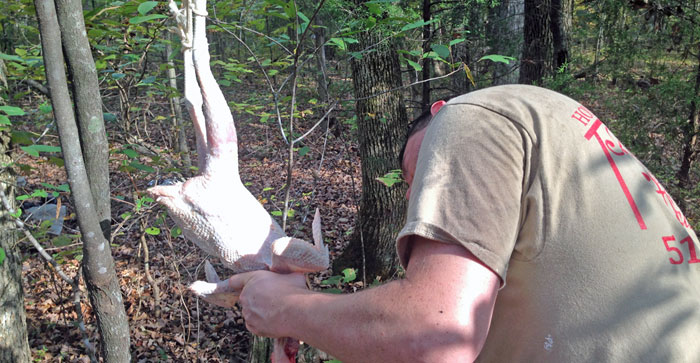 My wife came out to take some pictures at this point, because it finally “looked like a chicken” to her.

I committed the cardinal sin…  I accidentally cut open the intestine while trying to pull the innards out, so after attempting to empty them out on the ground, the rest of the time was spent trying to avoid getting the contents in contact with anything that I was planning on eating.  Due to having to watch YouTube ever 60 seconds, and avoiding getting poop everywhere, I was incredibly slow to say the least.

After a while, though, I was successful.  The guts were out, the poop was gone, and my wife said it would be ok if I finished in the kitchen (because I don’t yet have a surface outside to butcher them on).  At that point, it was much easier.

As I cut each piece – still watching YouTube videos – I decided to remove the skin completely, because there were still tiny quills throughout, and also tiny hairs all over it.  Most people I’ve seen use a small torch to burn the hairs off, but that won’t help with the quills! 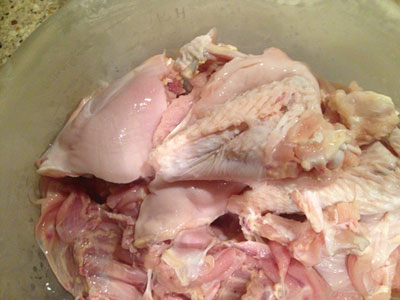 I should have taken a better picture of the meat right after I butchered it, but I forgot until after I’d already let the chicken soak in salt water for a day.  As such, it’s not arranged well whatsoever…  I think that’s part of the back on top (which technically shouldn’t even be a ‘cut’), and it’s pretty much just a meat pile.

That next day, I decided I needed to know how my chicken farming was really going.  I mean – I’d raised this thing from an egg, so I was going to be devastated if it didn’t taste at least, well, edible.  I pulled the legs out of the meat pile, and lightly fried them and warmed up some leftovers as sides – fried apples from my dad’s trees, and couscous with zucchini also from my dad’s garden (the zucchini – not the couscous).

The finished product is at the top of this post

The first couple of bites were amazing.  It tasted like chicken!

The third or fourth bites on each leg, though, let me know that I didn’t cook them long enough…  It was just a bit too juicy and pink near the bone, so I had to throw them in the microwave to feel safe enough to eat the rest.  Perhaps I ruined it by doing so, but it still tasted great!

A few days later, my wife cooked the rest of him for some enchiladas that we shared with some friends, though unfortunately we had to add a store-bought breast to have enough meat.  If I hadn’t eaten the legs, we probably would’ve had enough for the recipe – but I wouldn’t change it!

The other chickens have not crowed since.

This all actually happened a couple of weeks ago, and not much else has happened over the last couple of months or so that has pertained to getting off the grid… I went hunting once and even though I saw three deer I didn’t take a shot (though I now wish I had), went “deepish” sea fishing with my brothers in law (we were just off the coast – no keepers), and talked about homesteading a lot – but most of my time was spent working. (I’ve got a new gig – more on that later!)