Growing up in a small town in Kentucky, I’ve done a lot of redneck-y things in my lifetime.  But I think most people would agree that that today’s actions rank at the top.

I planned on writing about chicken changes: my brother said he’d bring a handful of young chickens to me after some Thanksgiving festivities, so last week I quickly boarded together a phase-two-temporary-coop.  There’s plenty to write about in that, and I have pictures, but that was before today.

Today, while getting things situated for the new chickens, I spooked some deer in my woods.  I was randomly going to see if one of the junk-filled sinkholes on our property held a piece that I was in search of, and about 10 yards in front of me a deer bolts across my path.  It was followed by another one fairly quickly.

As the first ran towards the edge of my property, I glanced down the road to make sure there wasn’t going to be an accident – because we live on a busy road, and accidents are fairly common.  (If I’ve not mentioned it before, I watched a girl’s truck slam into the telephone pole in my front yard while I was working at my kitchen table)

There was, indeed, a car coming.

The first deer runs across the road, and I think to myself, “Surely the driver saw the deer and will slow down.  Everyone knows there’s never only one deer that crosses the road.”

The second deer runs across, still with plenty of distance between it and the car.

Again, the thought crosses my mind, “I’ll bet the car will slow down now, after seeing two.”

The car did not slow down.

As I’m sure you’ve already gathered, there was a third deer.  It didn’t look like the car hit their brakes, so I was bracing myself for the bang! that I heard soon after the deer darted through the tree line that hid that spot of the road from my view.

I ran to the road to see if the driver was ok, but I didn’t see anything.  I ran a little closer to where the deer ran out, and I saw her laying on the side of the road, her tail and head still moving, obviously in pain.  I called my brother, who had left my house a few hours prior, with two questions.

I’d only been deer hunting once this season, and only a couple times in general before that.  Venison tastes great, and here was this big hunk of fresh meat that otherwise would sit on the side of the road for a few days, bloated and rotting.  I mean – I was doing everyone a favor.  Nobody from the county would have to come pick it up, and the driver could sleep at night knowing that the animal they hit didn’t go to waste.  (Well, the driver would never know, because they didn’t stop – but I’m looking for more people I’m doing a favor for)

So, I think from this situation I learned the following lesson:  If at first you don’t succeed at hunting, wait for the animal to fall down dead on the road by your house.

So, I dragged the body into the woods a little ways, because again – a guy with a knife inside the belly of a deer right beside the road isn’t a situation that everyone would be completely comfortable with.  I got it into a clearing and texted my buddy Lane to see if he wanted to come help because he’s a new deer hunter as well, and he and his wife hopped in his truck. 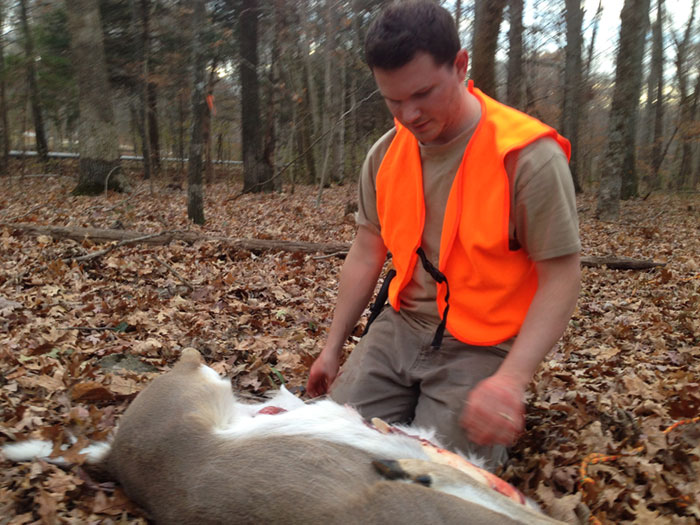 I donned the hunter orange just in case there was anyone illegally hunting on my property and couldn’t tell that the deer was already dead.

I started before Lane got there, though.  And just like last time with the chicken, I had absolutely no clue what I was doing.  Times 100.  I called my brother again, and put the phone on the ground next to me on speakerphone.  I felt like I was on a tech support call, because I was trying to describe what I could see, and he was trying to explain what I should see, and neither one of us really knew what was going in the deer in front of me.  I think he joked at one point, Have you tried turning it off and on again?

I’m sure the NSA is already tapping my phone (I’ve sent out too many texts about my frustration with the government), so they were probably watching my house before the call was over.  “Wait – which part of the ribs do I stick the knife in?”  “Do I just get a thin layer of skin, or do I cut deeper?”  “Are her lungs supposed to be gray, because there’s this big gray thing on top of her heart.”  And that was before trying to describe cutting around the butt hole. 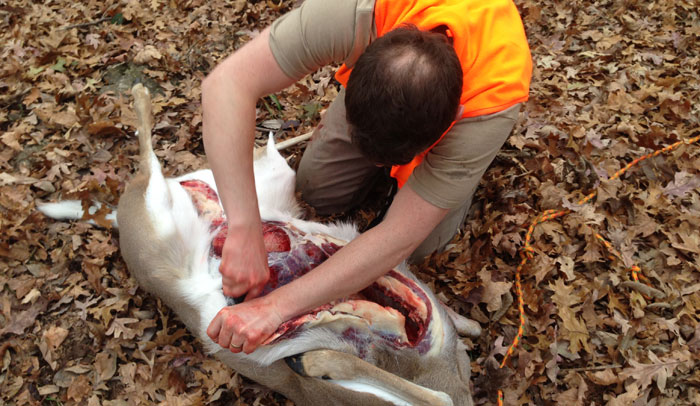 I call this piece “Bald Spot.” Credit to my lovely wife for capturing the essence of the moment.

I’m pretty sure it took me well over an hour to simply field dress the thing, so Lane got there in plenty of time to help.  We had both been around cleaning and butchering deer before, so we both had the general concept – but that’s much different than actually knowing how to do it.  So we flailed together, with my redneck tech support on the line.

We finally got her hung up in my car port (I’m sure that was my wife’s first choice for location), after first using a rope that sagged so much that her neck was laying on the ground.  I really should get a GoPro, because I just can’t explain how hilarious it probably was to watch us. 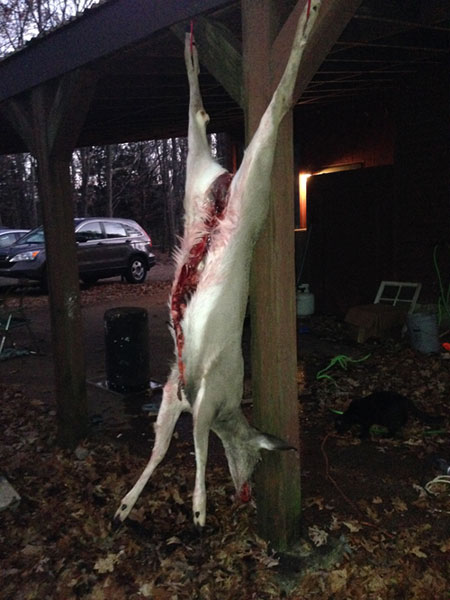 We opted to have a column in our way because, well – we just didn’t think that far ahead.

The next few hours were spent cutting while on the phone with various people, watching YouTube videos, and trying to remember details of the last time we’d seen a deer butchered.  It definitely wasn’t the prettiest butchering job ever seen, but it resulted in a fridge full of meat, so I suppose that’s all we could ask for. 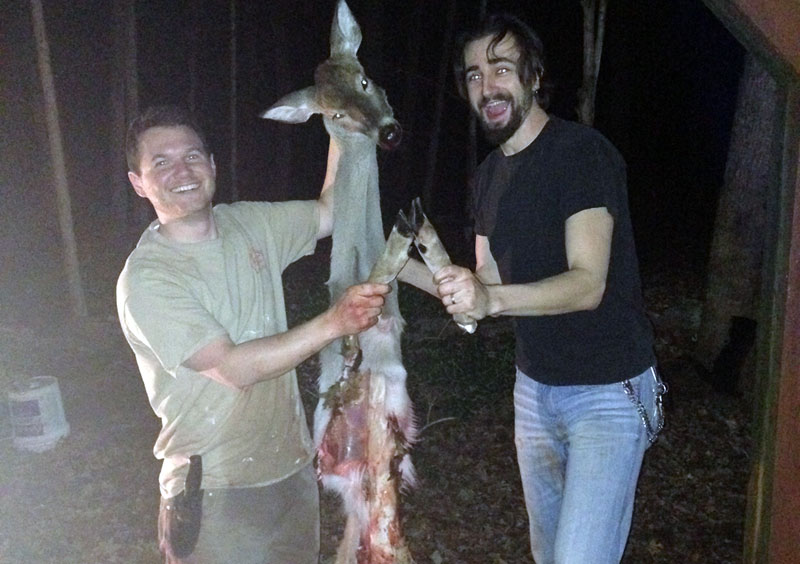 I probably should have taken pictures of the meat after it was cut, but I didn’t.  Just imagine that you walked into a butcher shop, but the normal butcher was out sick, and his son (who wants to be a poet) is filling in.  It will definitely still cook, but looks like somebody tried to murder it.  It’s sitting in the fridge right now, and over the next few days I’ll cut it up a little further to freeze it.  For now, though, leaving it in the fridge for a while will apparently help it not to taste too “gamey.”  Because we’re extremely picky about our roadkill.