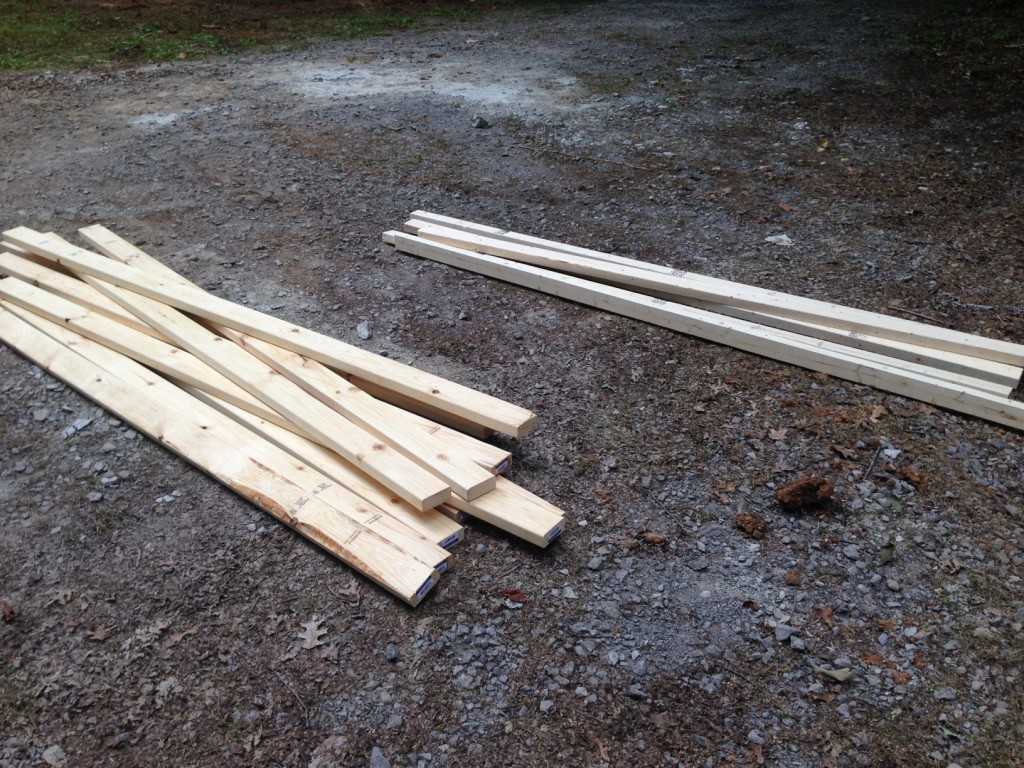 I have a good amount of scrap wood leftover from our house, but not a lot of good clean 2×4’s (or studs, as those of us in the know call them; my constant joke when trying to find a stud is to simply say “I’m right here.” Always a crowd pleaser, amiright?), so I picked up a handful from Lowe’s. I also picked up some 2×3’s because I thought it would be more efficient to make the run out of those to keep it light. Looking back, I should have gotten only one or the other – not both. 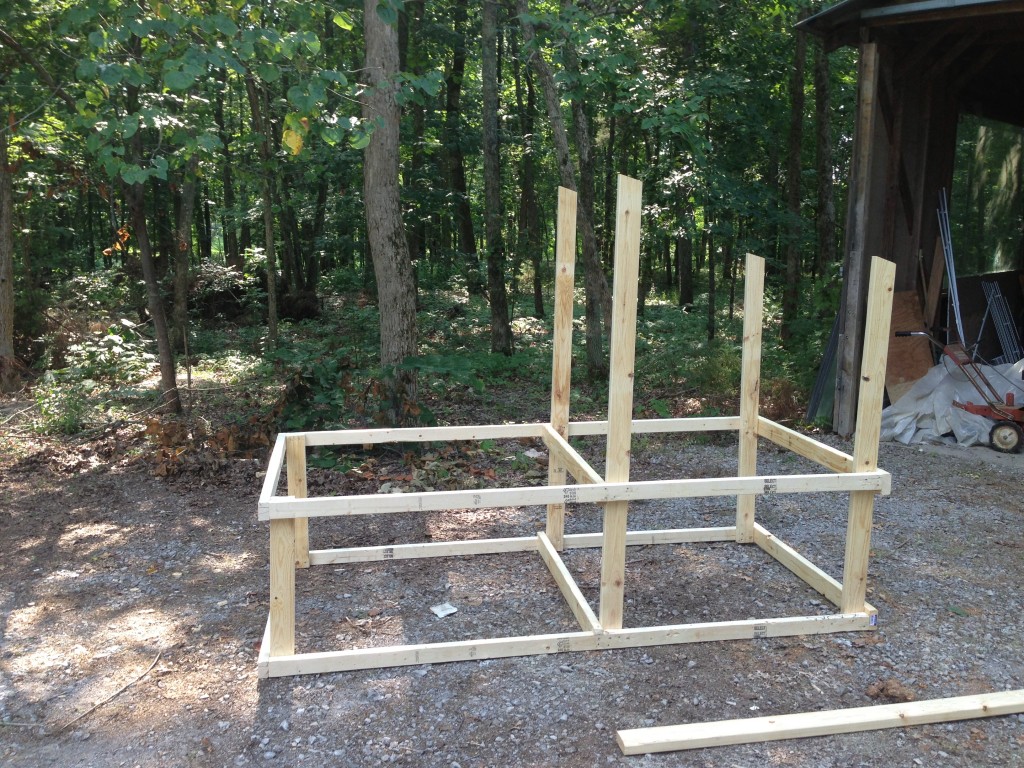 I kind of drew up a plan – to the point that I could figure out about how many studs I would need.  I didn’t follow that plan very long, because of the following reasons:

One thing I thought I knew for sure is that I needed 4 square feet per chicken in the coop, and 8 square feet per chicken in the run.  (My brother informed me that I actually needed 10 sq ft in the run, but I was close!)  I decided to go a little tight on those numbers, though, because I want to build a stationary coop and run big enough for 20 or more feathered friends – so this is simply another step along the way.  The main reason for keeping it tight is because since I was building a chicken tractor – meaning I would move it around as they eat everything in the patch of grass it contained – I didn’t want it to be huge and hard to move.  It’s still pretty huge and hard to move even at its current measurements. 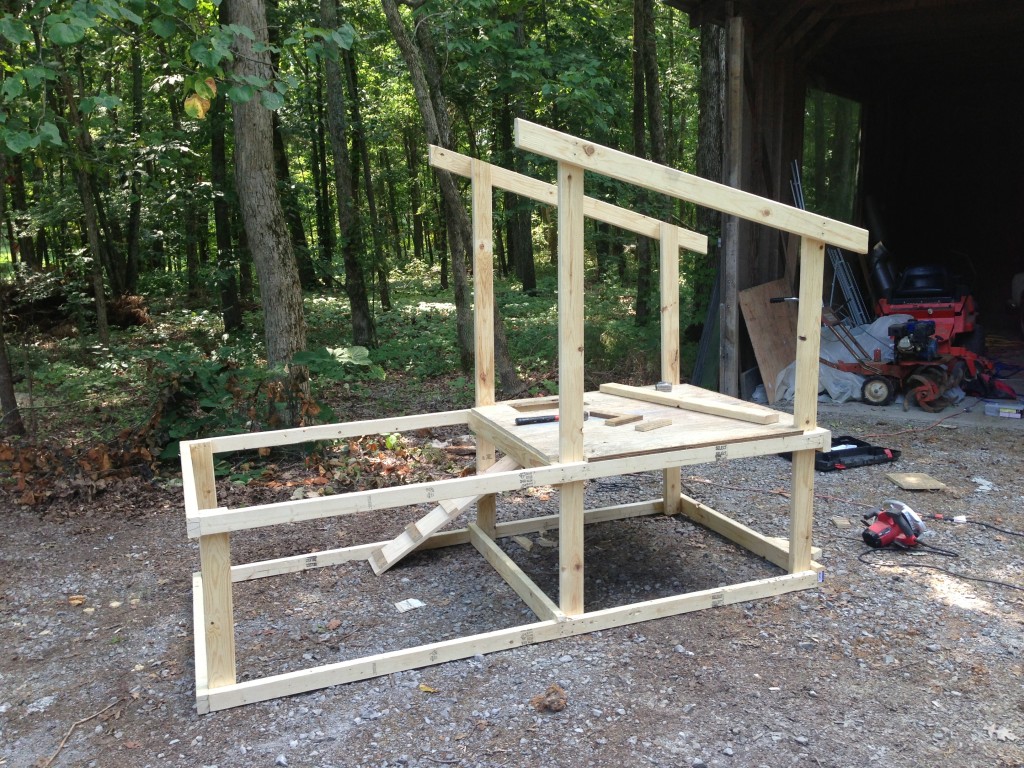 Probably not the right way to add a roof – but again, these are chickens, people.  I decided on a run at 8’x4′, and a coop that would sit on top of half that – that way I could keep it fairly compact while not sacrificing the space on the ground.  You might or might not be able to see the differences in the 2×4’s and 2×3’s, but I started getting nervous when I got to joints that were made with the two types of wood.  It ended up being fine, but I had to finagle them a bit.

Hopefully you won’t see from the pictures that it’s definitely not squared up.  Almost none of the angles.  But I blame it on working on an uneven surface.  And also on the fact of never checking to make sure my angles were square.  Lesson learned. 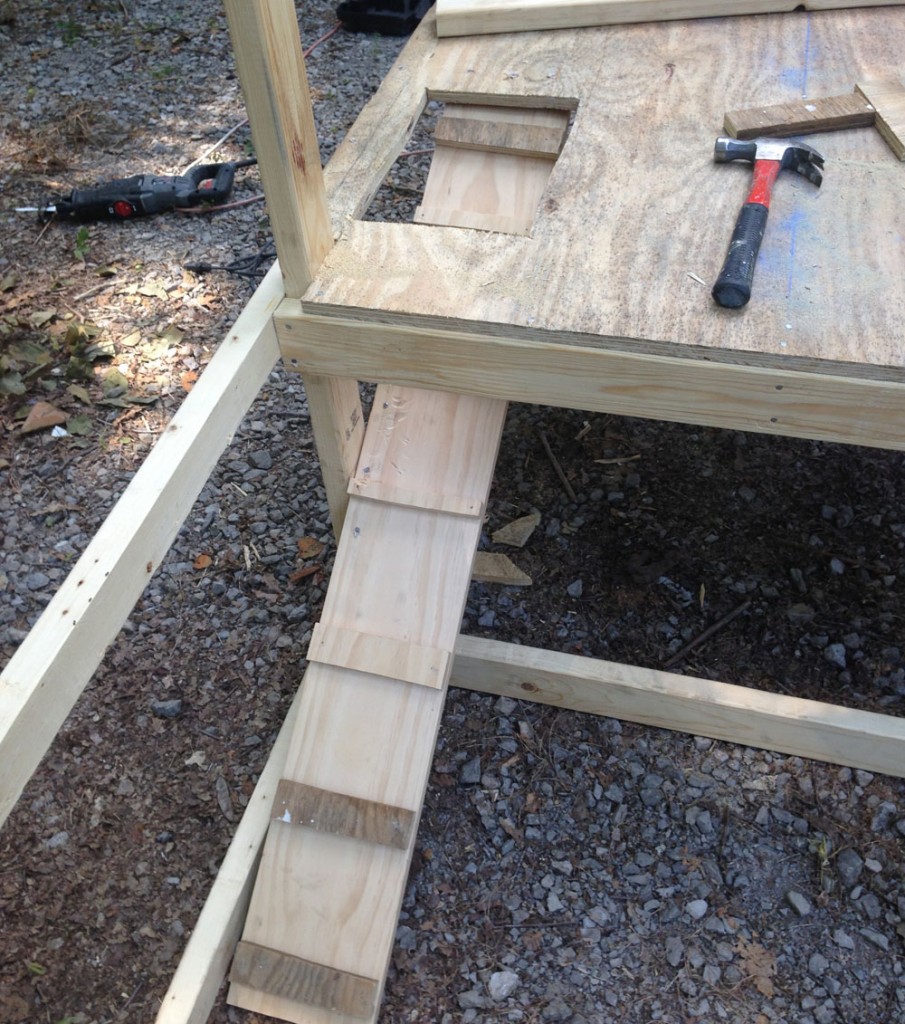 There’s a better picture of the ramp, which is braced by a couple 2×4’s nailed into the coop floor and the corner board.  It’s mostly made from scrap, but they don’t seem to mind. 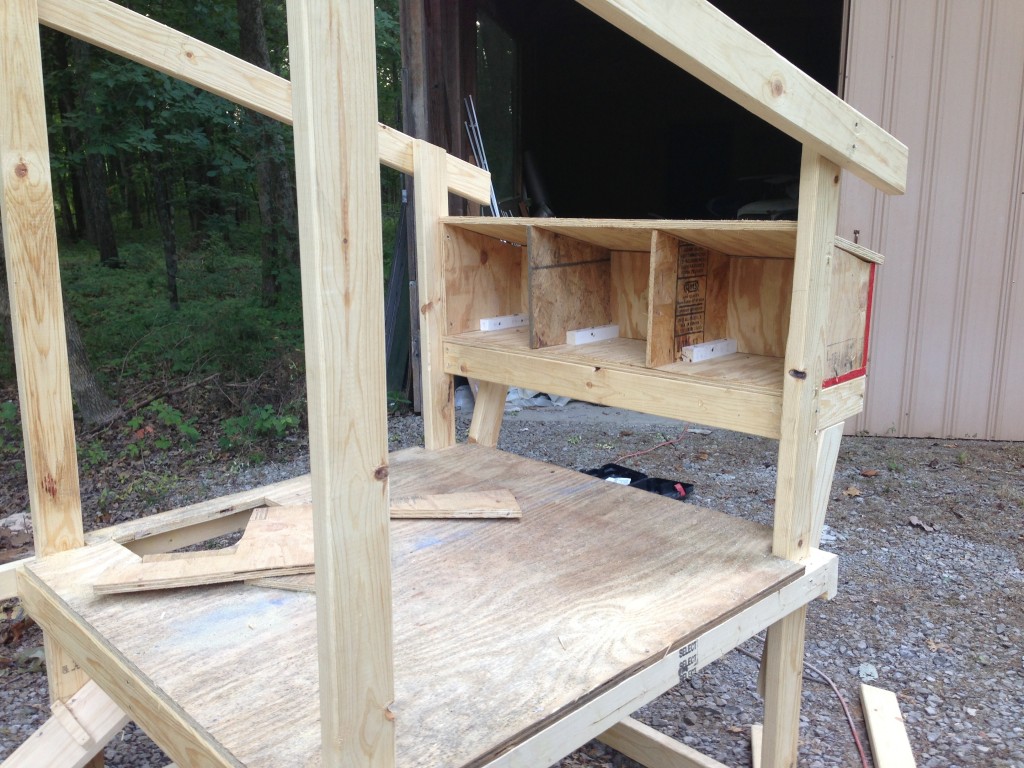 I pretty quickly realized that even though I planned on having nesting boxes that were accessible from the outside, I hadn’t planned on it.  I had to add the braces because they were sagging pretty badly – and I figured that adding the weight of birds and eggs and bedding would not somehow lighten the load.  I’m pretty proud of how it turned out, though, after calling my brother a couple times and doing some research on the interwebs. 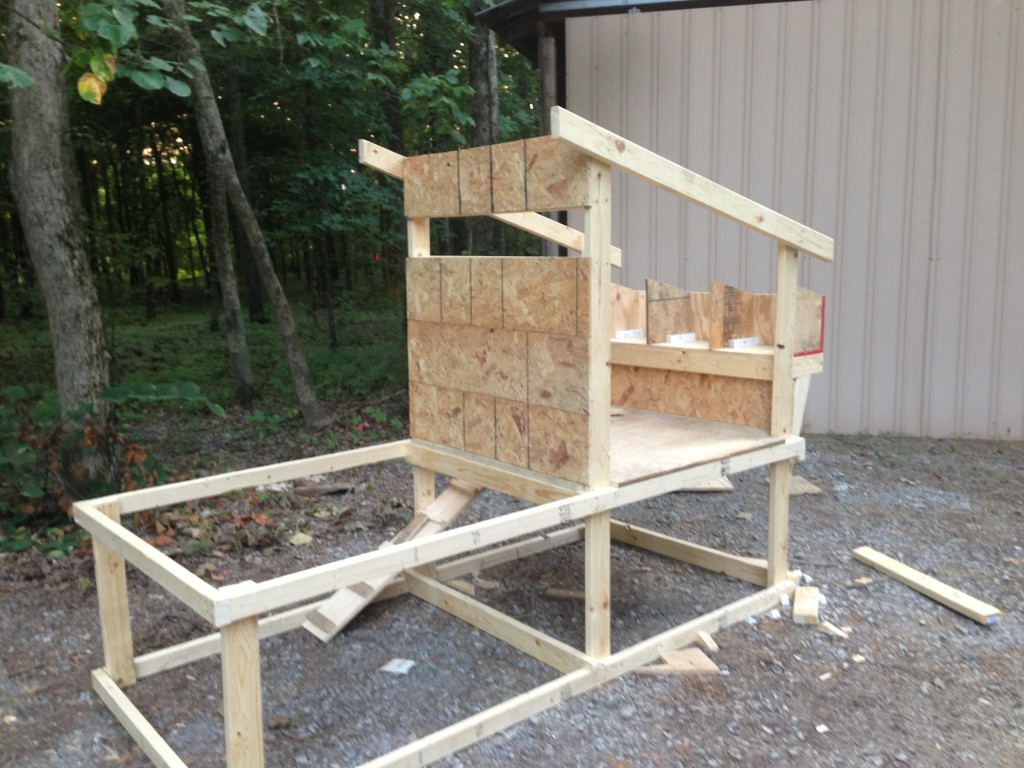 Some of the “finishing touches.”  Kind of looks like a fort – like the ones that my brothers and I used to build in my parents’ basement when we would launch empty plastic bottles at each other.  If I had this fort, I would’ve been unstoppable.  Which is not to say I wasn’t unstoppable without it.  (Ok, I was not unstoppable.) 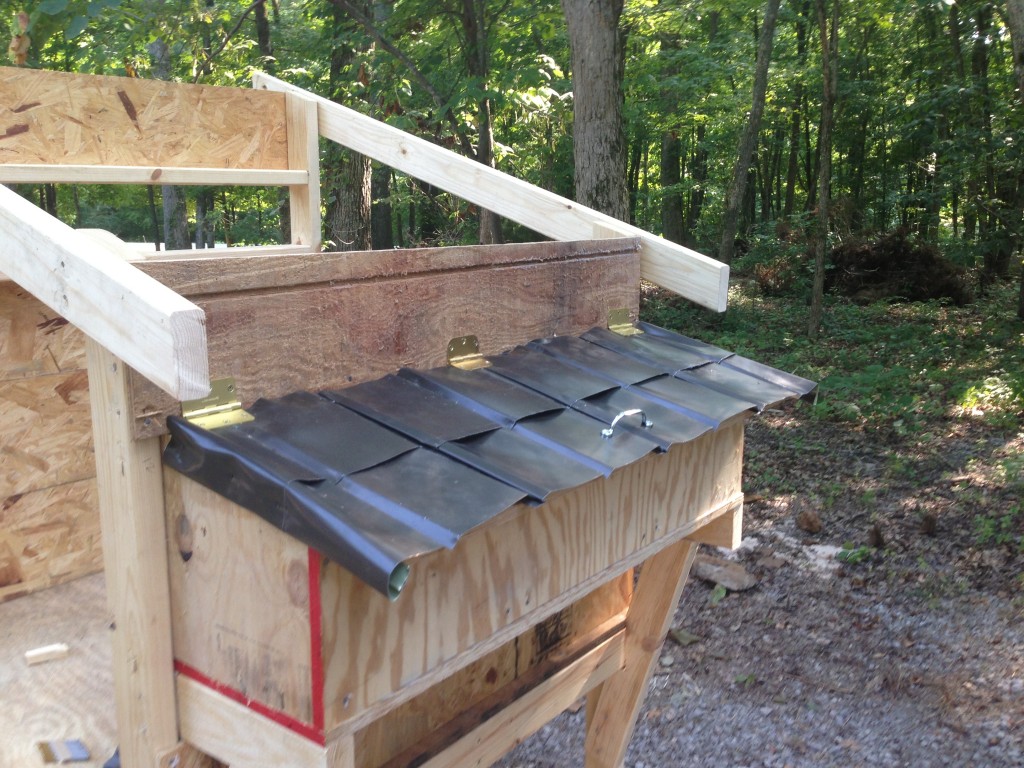 It’s really ugly and probably dangerous, but I have a lot of metal flashing leftover, and wanted to make sure my nesting boxes were super weatherproof.  Just don’t touch the edges.  Or if you do, make sure your tetanus shot is up to date.  It took a long time, because most of these pieces were cut off after they were formed together, so I had to pretty much unform the edges to form them again.  And because I’d never done this before. 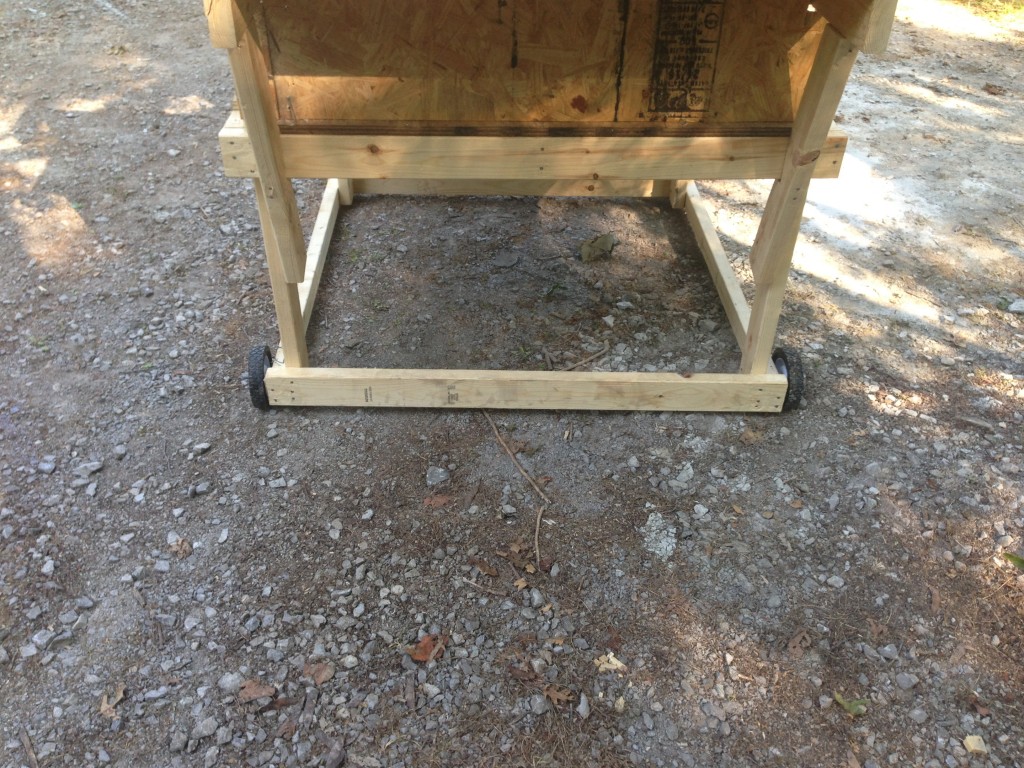 I added some 6 inch lawnmower wheels to be able to move it around.  However (spoiler alert), I ended up replacing them with 7 inchers, because the smaller ones weren’t easy to work with on uneven ground.  The larger ones lifted everything off the ground just enough to keep me moving, but not enough to worry about leaving enough space to let them shimmy out. 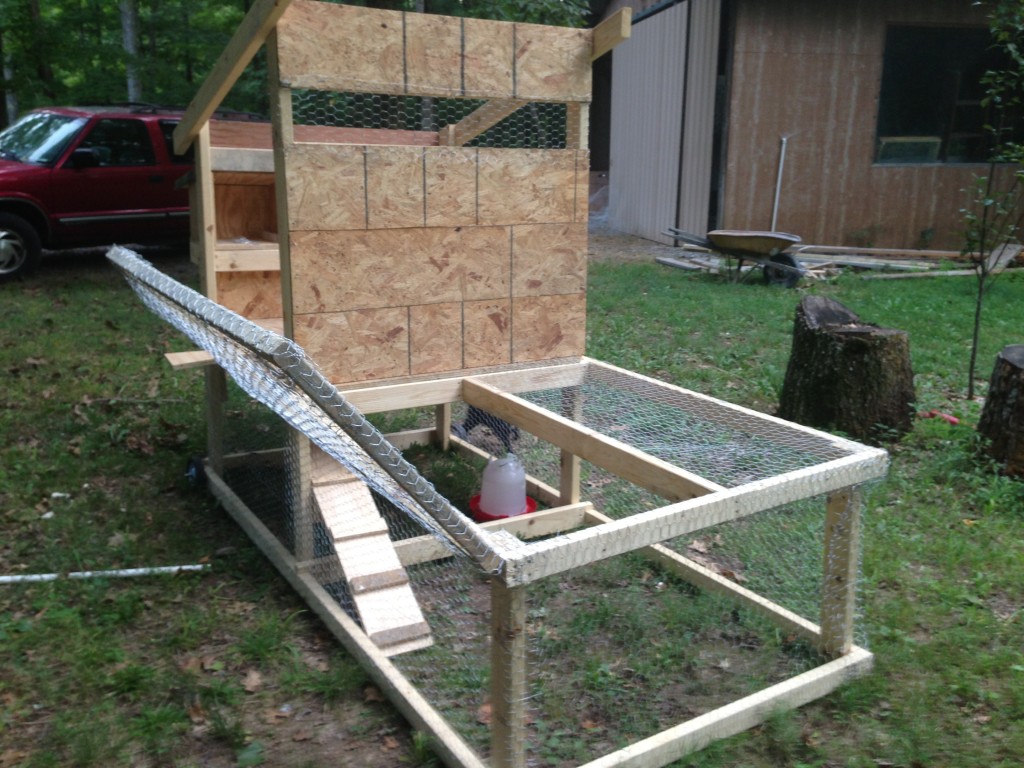 Here ’tis with all the chicken wire on the run – which was a very tedious and laborious process.  I had to cut each individual wire, and then staple almost every individual wire.  If someone knows of a better way to do this, please let me know in the comments – because I feel like the way I did it can’t be the most efficient way.  This is also a peek at the new waterer and feeder, because… 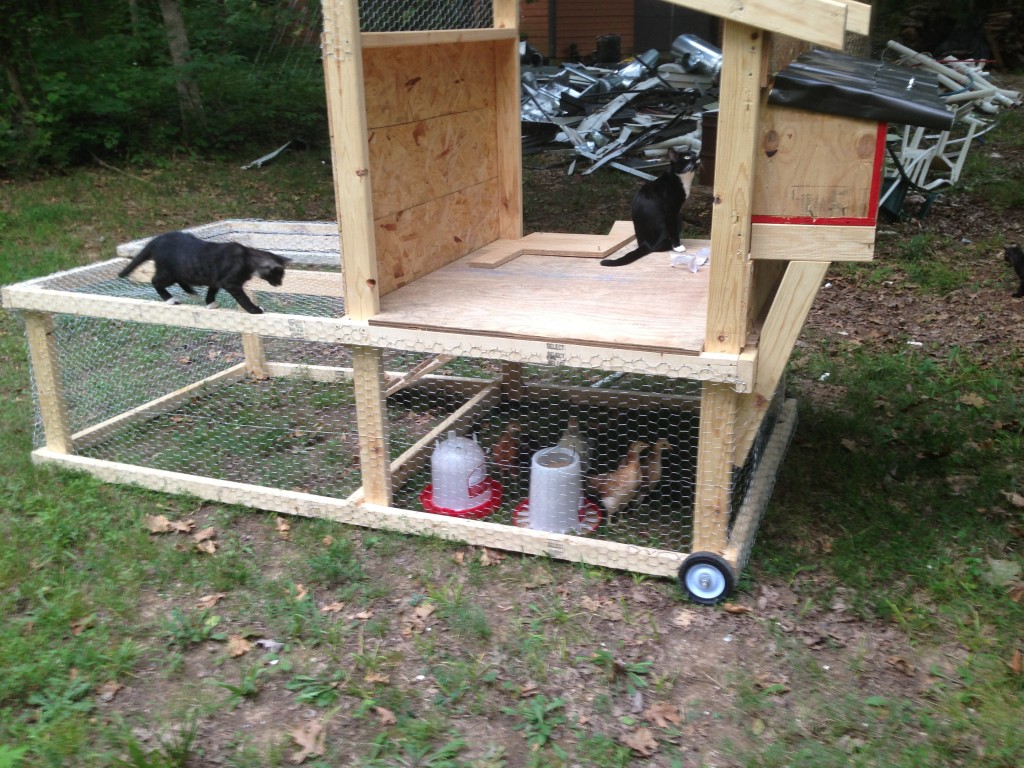 I just couldn’t let my birds sit in a cramped box when I basically had a finished run for them.  I screwed a piece of wood over the coop entrance and put them inside.  After a time of obvious confusion (they had only ever seen a roof above them and sand/paper towel below them – never the sky nor grass), they were super excited to run around.  As were my cats.

I was nervous that the cats would get aggressive with them (one of my cats, while pregnant, chased down a squirrel and ate it), but they seemed to simply be curious.  I kept my eyes on them for a while, but they apparently like to watch the fowls just as much as I do. 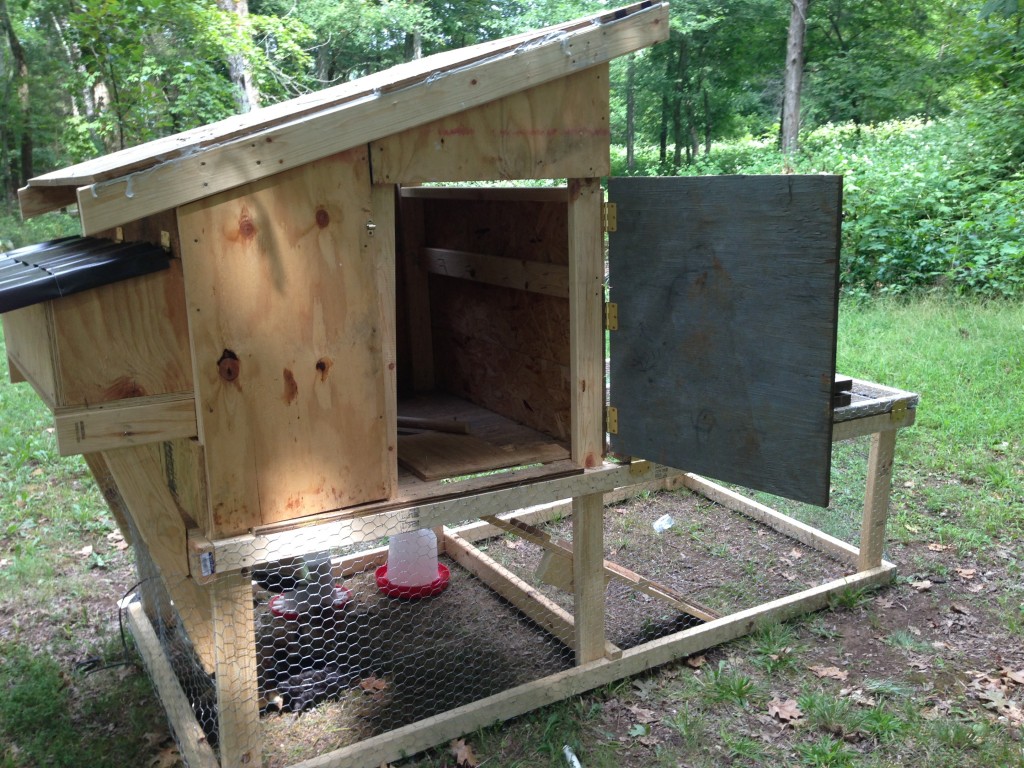 Almost done!  Added a door, walls, and a roof.  I also added a few more 2×4’s to brace those things (but did it after I had much of the plywood on, so they’re not included in the ‘skeleton’ pictures.  I sealed up the roof pretty well with caulk (the contractor’s version of duct tape), but later added some roofing paper to make sure and keep the leaks out. 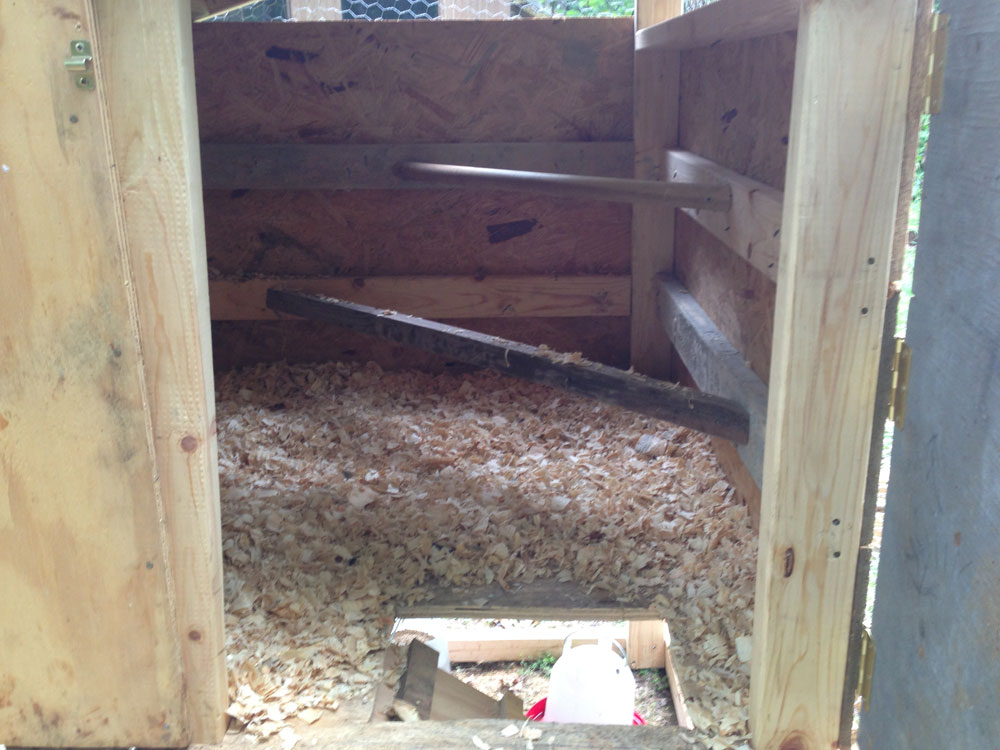 There’s another thing I forgot – roosts!  It’s a chicken’s natural instinct to sleep off the ground to keep away form predators, so this was another thing that I was planning on, but didn’t include in my plans.  I ended up adding some more 2×4 braces – which is much more difficult when all of the walls are on.  Then I just cut some 45° angles on some roost-ish wood I had and drove some awkward nails. 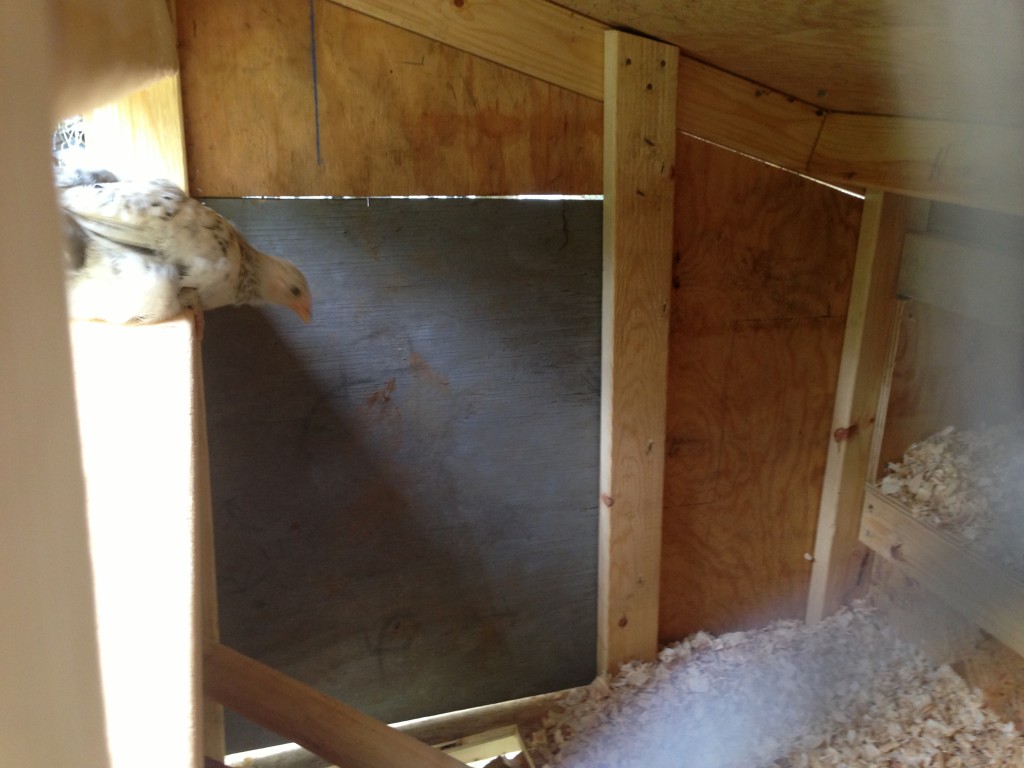 I added some bedding, and voila!  One by one, they started figuring out that their home had doubled in size.  The first to find it (a rooster, I think) wanted to see just how high he could get.  Luckily, as soon as he got to the highest point of the coop, he pooped.  Thanks for the commentary on the craftsmanship, big guy. 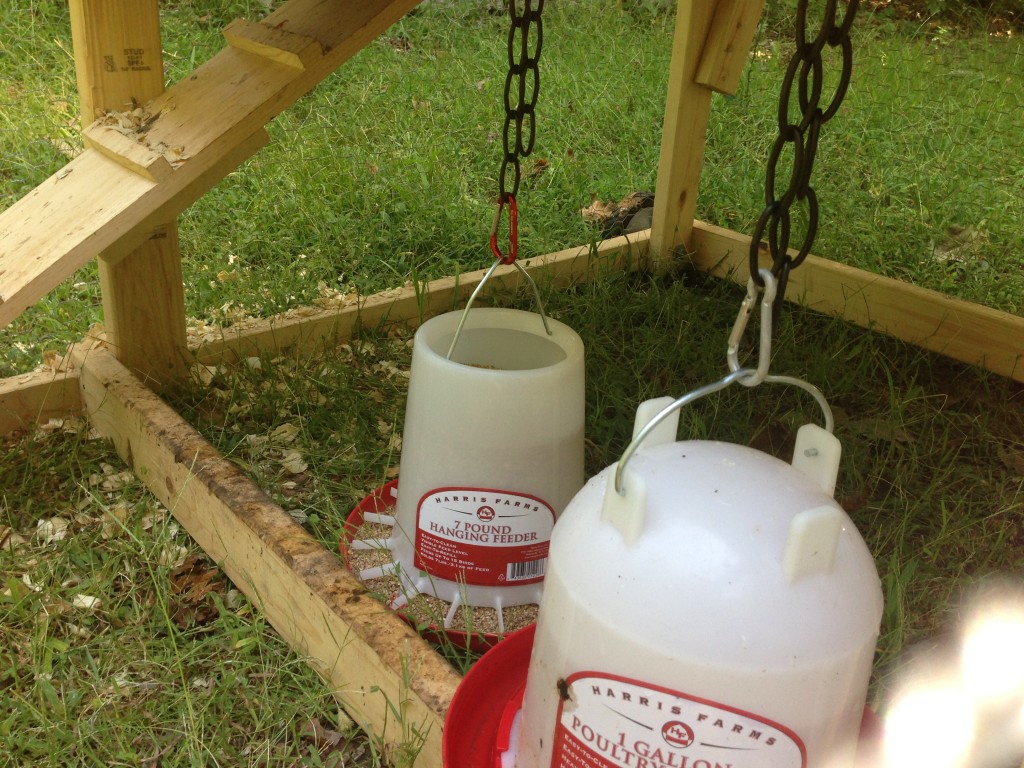 I also added some chains to the waterer and feeder so that I wouldn’t have to take them out to move the tractor, and also to try to get them to stop pooping in both.  Because they do that constantly.  That can’t be healthy.

Funny story about the bedding: I went to Tractor Supply for the waterer and feeder, and told the checkout guy that I wanted to buy some pine shavings (which were outside the entrance).  He asked me if I wanted flake or fine shavings, and I just randomly said fine.  A guy who walked in, but had paused to watch me check out (creepy…) said “You want the flake.”

I simply said “Oh?” with a surprised look on my face.  “For chickens?”

“Yes,” he said.  “The fine stuff will fall out of every crack in your coop, and you’ll have to add more all the time.  The flakes will last longer.  I noticed your feeder, so I figured I’d help you out.  This is my third year.”

Ah – not so creepy now.  I said thanks and told the checkout guy “Flakes, please.”  I definitely see how flakes are better now – especially because I’m still losing a lot of it through the hole by the ramp.  I think I’m going to build a small ‘fence’ around it so that it won’t fall out so easily.

Now that I’m a farmer I feel like I’m in a club.  A club where, when I’m at Tractor Supply, random people – who are passionate about some of the same stuff – will gladly look awkward for a moment to help a brother out.  Same for bee keepers…  Every single one that I’ve talked to has been super excited to help out and show me anything I want to know.  Reminds me of a simpler time, growing up in Cairo, Ky, when everybody considered you to be a neighbor even if you were a 20 minute bike ride away.  Hopefully, I’ll have some awkward wisdom to give to someone at Tractor Supply before too long.

Here’s a mini tour of the Coop d’etat:

4 thoughts on “Coop d’etat: How to Build a Chicken Tractor. Sort of.”