A lot has happened over the last three weeks!

At the risk of sounding confident, I’m actually getting a hang of this whole beekeeping thing…  I guess about two weeks ago, I decided to remove the top feeders in both my hives, because both hives had a decent amount of “honey” stored up.  (I put quotes around honey, because a lot of the honey was made from my sugar syrup rather than nectar)  I figured that, while flowers were blooming, it would be better for them to go out and gather rather than lazily assume that food will always be raining down over their heads like manna.  That way, when I put my first medium honey super on, I’ll get pure honey rather than sugar water.

I put my second deep brood boxes on both hives about three weeks ago, before removing the top feeder.  The last time I poked my head in, they hadn’t drawn much of the new frames out – just starting on the center frames – but there were a good amount of bees exploring it.  I’m going to be checking in today – so it probably would have been better for me to wait to post with a fresh update, but I just wanted to post everything that has happened lately.  (Or I won’t – because it started raining as I was writing this) 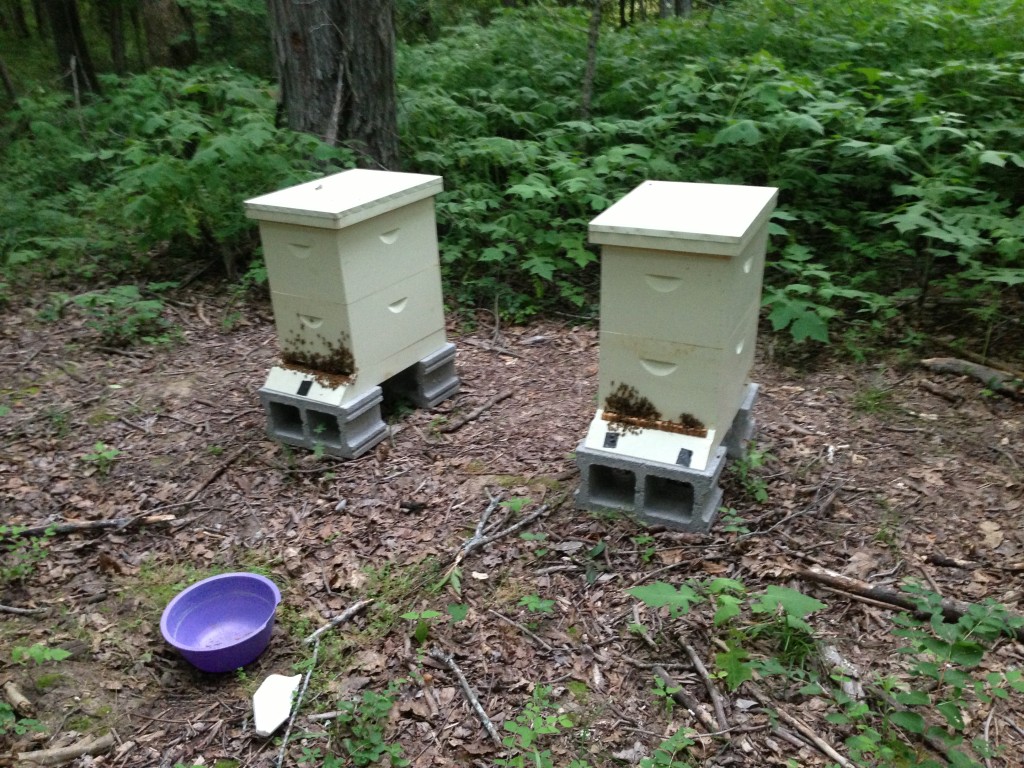 I also removed the entrance reducers for both hives, which are used to simply reduce the size of the entrance so that a small hive can defend itself.  If they have a wide entrance, then robbers (bees from other hives that are low on honey stores) could come in and steal honey without encountering a lot of bees.  The first hive (the one with only one mark on the entrance, and the one that I thought had no queen for a while) pretty much immediately covered the entire entrance board, which proved that the reducer was getting in their way.  Later that day, the second hive, however, only had a few bees around where the entrance used to be, and seemed even less active than when I took the reducer off.  I put it back in, but somewhat awkwardly diagonal, so that bees could get in almost half of the whole entrance.  I checked on them a couple of days ago, though, and removed the entrance reducer at that point, and they’re defending like champs. 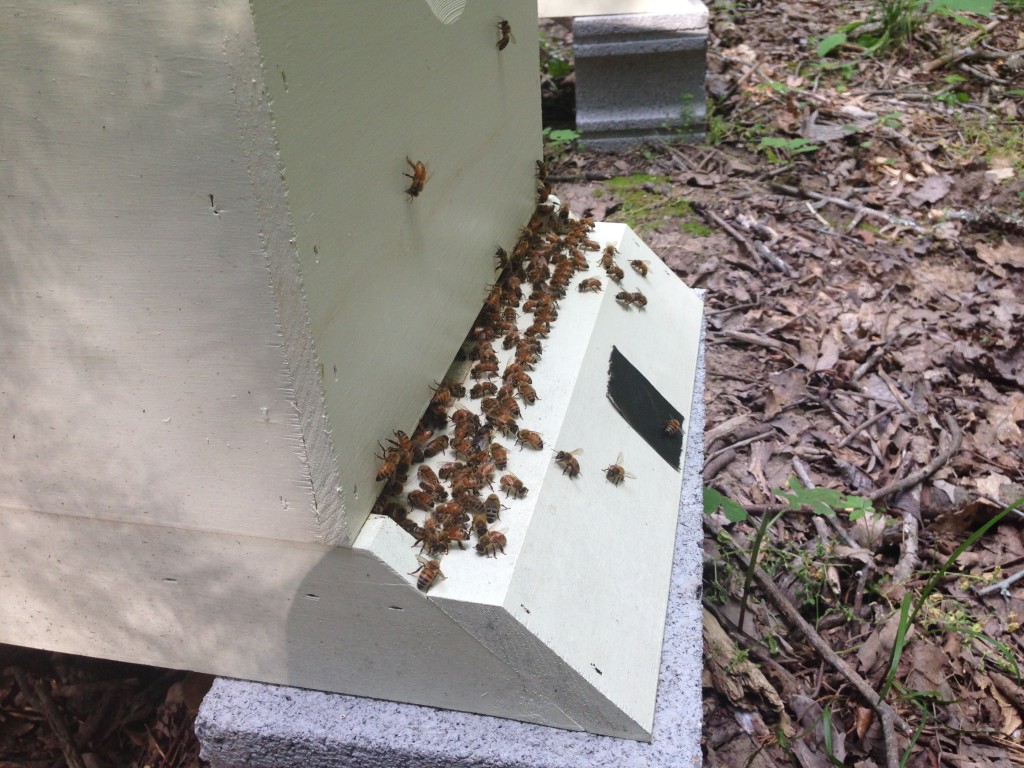 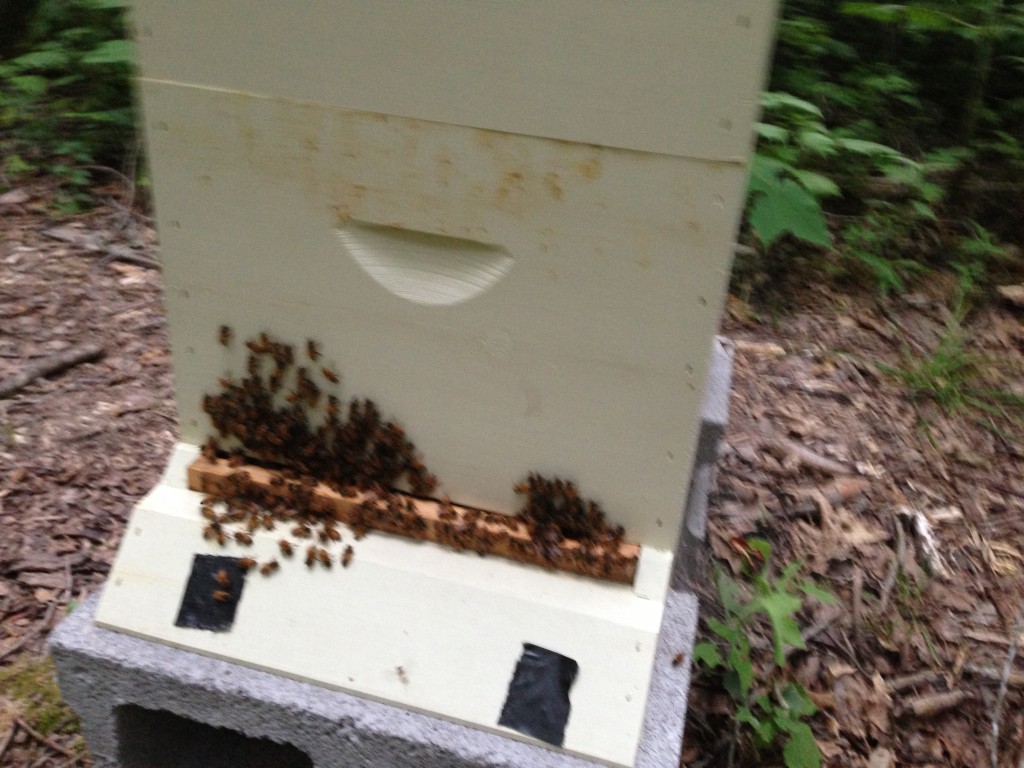 The picture is above is fairly late in the day, so there are a lot more bees hanging out than mid-day.  I saw both hives bearding the other evening, and I thought I took a picture, but apparently I didn’t.  “Bearding” is basically when all the bees are home for the night, and a whole bunch of them cover the front of the hive because it’s hot inside – way more than the picture above.  If they’re bearding mid-day, then you’re probably about to have a swarm (half of your bees will leave, if not all) – or at least that’s how I understand it.  If I’d seen a hive of bees bearding before I learned all of this stuff, I probably would have assumed they were plotting to kill me.

Here’s a little zen bee moment for you…  Their buzzing is actually calming to me these days, because I’m continually in awe of them, and of the design that they are following perfectly (that results in honey for me!).  Around 1:40-2:00 you can see the queen (bottom right at the beginning, then bottom center when I turn the frame around.

Two weeks ago Holly and I went up to Kentucky to see my family for Father’s Day, as well as go to Hasting Plants (my aunt’s greenhouse) for her annual season-end blowout.  (If you’re in the southern Indiana/Illinois area, you should check them out.  But – next year.  Season’s over!)  My brother was originally planning on giving me some eggs from his meticulously bred Delaware chickens, but the roosters up and died not too long before he started breeding them, so I got a mix of 15 Delaware, Ameraucana, and Black Copper Marans eggs.  I promptly put them in my incubator upon getting back home, and they’ve been sitting there for almost the entire time since.  I’ve opened it a few times to add water to keep the humidity up, but I’ve been trying to simply leave them alone.  For the first day or two, I constantly looked in on them – as if my eyes would make the process any faster…  I’ve calmed down since. 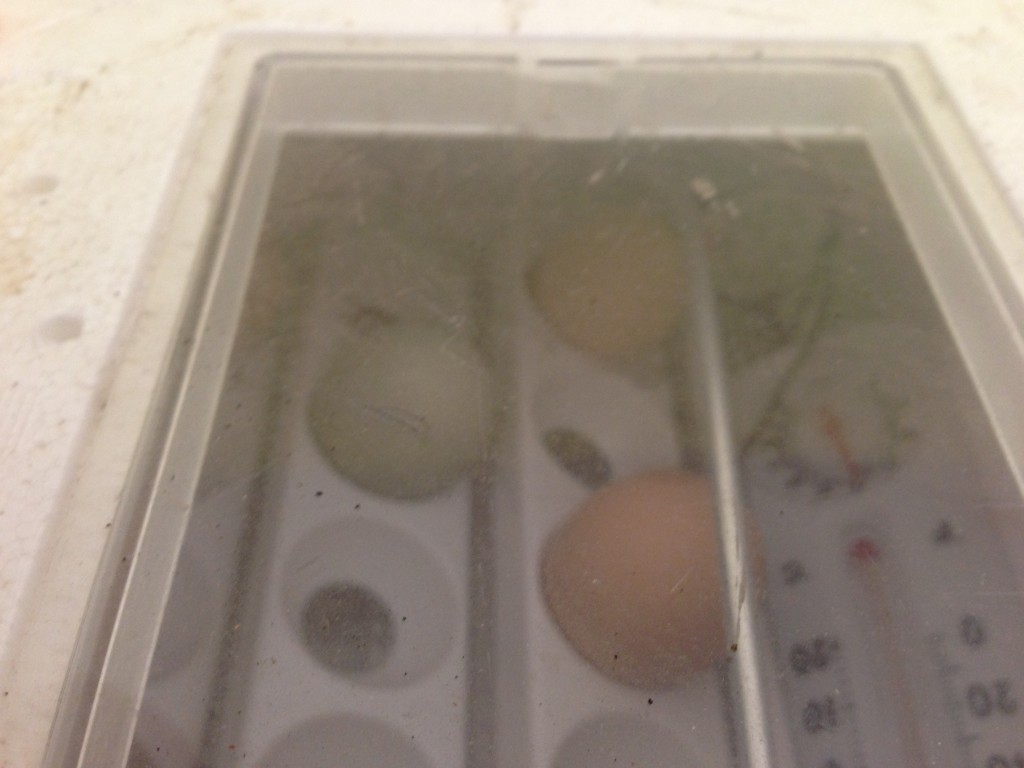 I candled the eggs a few days ago, which is taking them in a dark location, and putting a light behind them to illuminate the inside of the egg.  A few of the eggs are blue-green, and I couldn’t see through those shells at all, and I think I need a few flashlight because the others still didn’t give me a great look.  The image at the top of this post is what a candled egg looks like – though that is not my image because I could barely see inside even when I wasn’t trying to get my camera ready.

I candled them again today, because there were a few that looked to me like they weren’t developing.  I didn’t take them out of the incubator early in the week, because I didn’t want to make an assumption and throw away good eggs.  When I did it today, though, 5 eggs still looked completely undeveloped, so I pulled them.  I cracked them open to confirm, and four of them looked like they never started developing, most likely because they were jostled too much during travel (all of those yolks were broken).  The last one started developing, but died probably on day 7, based on how the embryo looked.  I couldn’t tell at first, because the eggs had a large shadow ring inside it, which I thought might be a big crack in the shell messing with the light.  I called my brother and he told me it was probably a blood ring, which basically is a sure sign that the embryo died – and that was confirmed when I cracked it open.

I’ve still got about a week before they start hatching, which means I need to get on the ball in terms of preparation.  The first living arrangement won’t be too difficult, but building their long term home will take some time.  I figured if I actually got the eggs first, I would have some hard deadlines to make sure these things happen!

2 thoughts on “You Win Some, You Lose Some”