A lot has been going on, and I probably should have posted this almost two months ago, when I actually started getting eggs, because I was super pumped then.  Now, it’s kind of normal…  I’ll try to muster up some eggcitement for the purposes of this blog, though.  Or, at least I’ll crack some bad yolks.

It was quite cold outside – well below freezing for days on end, and I decided to give my chickens a little warmth so that they wouldn’t hate me.  As far as I know, they’re much better egguipped to deal with cold temperatures than you or me are (well, unless you’re actually a chicken), because they basically have the egguivalent of a down comforter on all the time.  As they metabolize their food, they generate heat that is trapped in their puffed up feathers.  At least, that’s what a guy on the internet said.  Because he’s on the internet, I can trust him.  But I still added my heat lamp from when they first hatched. 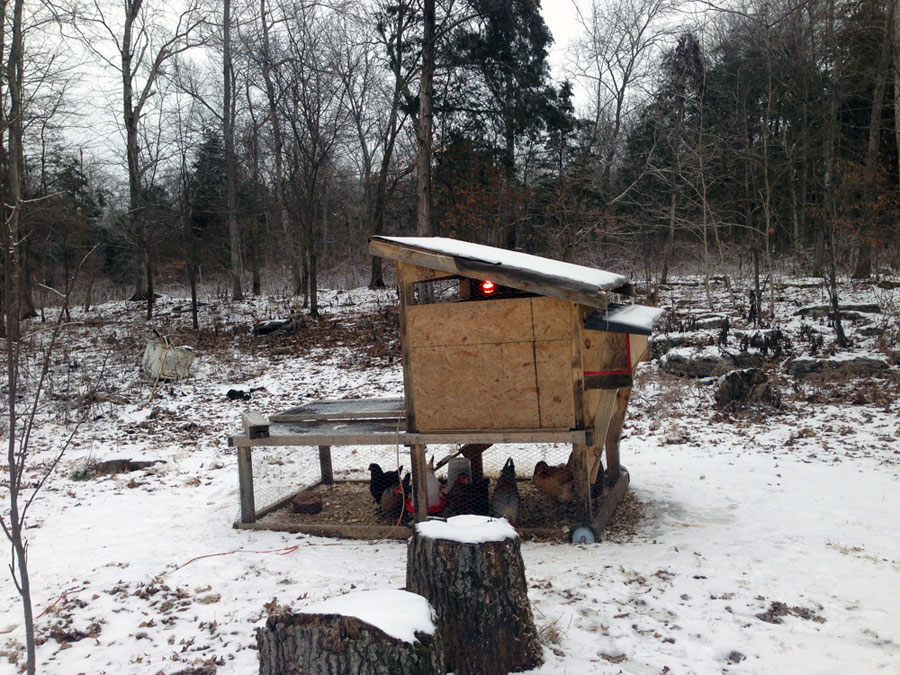 Put on the red light

Hens don’t lay nearly as many eggs in the winter because the days are short, but I think when I put the heat lamp in there I kind of faked them out.  I can’t really be sure, though, because they were definitely at the age where the should be laying, and since the heat lamp is red, I’m not sure that that did anything as far as eggstending the daylight hours.  I’ll bet they were simply annoyed at the red light keeping them awake at night, but none of them got too eggravated about it. 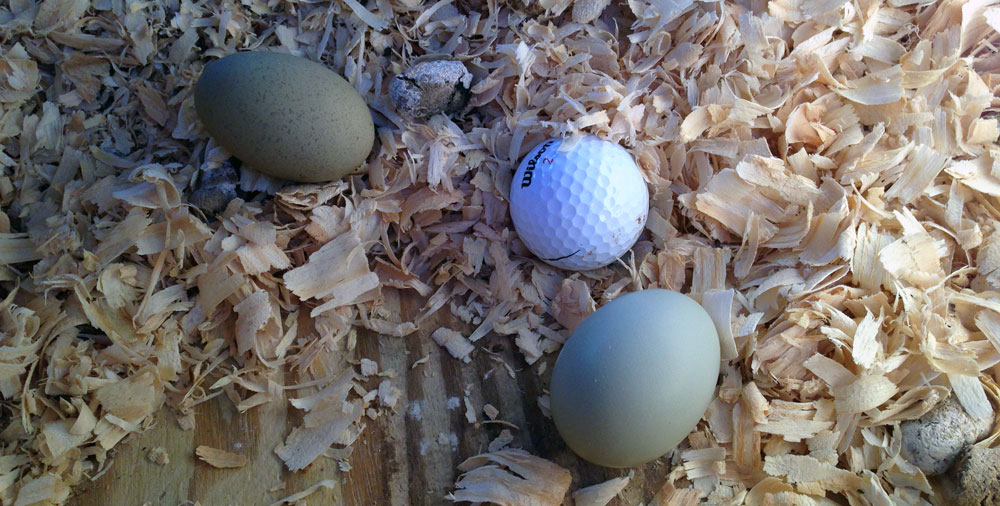 Anyhow, I occasionally would check the nesting boxes for eggs, just because I wanted to be ready if they did actually start laying.  I’d gotten used to seeing nothing, so I was incredibly surprised to see two eggs sitting there one Sunday afternoon!  It had to be Henrietta and Peepnelopeep, as they were the oldest.  Not that I actually call them that.

Those two eggs were delicious. 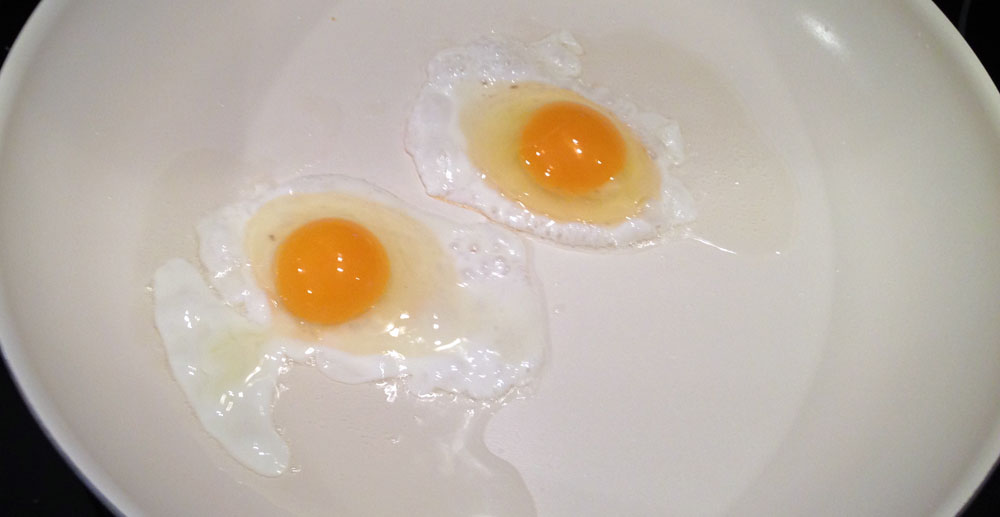 Omelet-you finish, but frying is the best cooking method of all time.

I was getting two eggs on an average day (sometimes just one).  I’d been putting a lot of pine wood shavings in the coop floor and at the bottom of the nesting boxes, but they usually shuffle (or soufflé) that around, which would leave the nesting box with a fairly bare wood floor.  So, one day I came out to one of these. 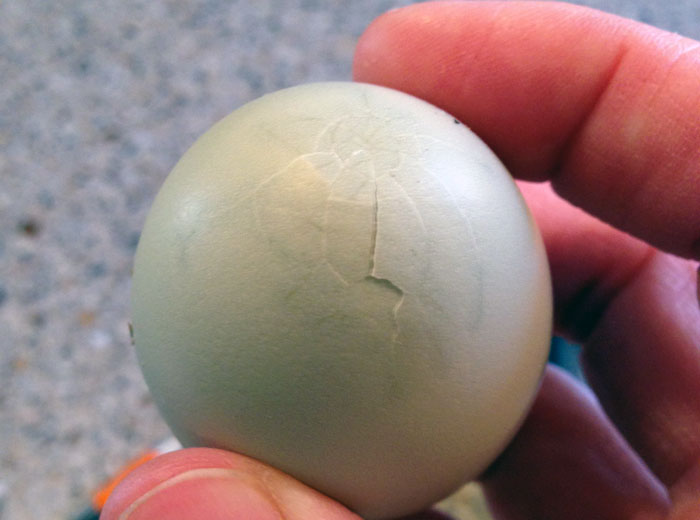 When she laid the egg, it dropped to the bare wood and cracked.  I just tossed the broken egg (well – actually I crushed it an gave it back to them, because there are tons of nutrients in an egg, and almost all of it is specifically there for a chicken to eat in order to survive for a few days), and filled up the nesting box with wood shavings again.  But, alas, I lost every 5th egg or so to the same situation, so I decided my hens needed an upgrade. 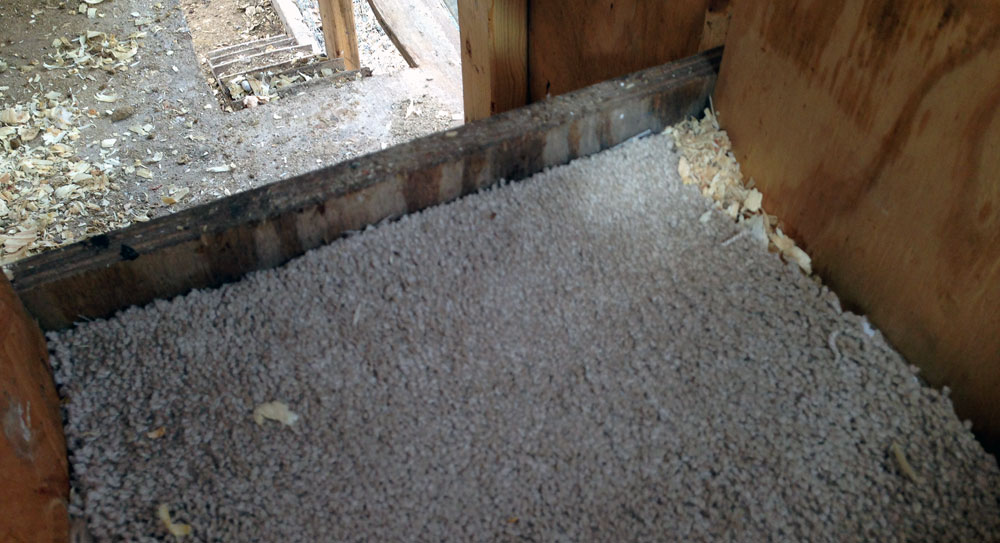 We have some eggstra carpet from our earlier renovation, so I just cut some pieces to size and put them at the bottom of the nesting boxes, then covered them with wood shavings.  They still knock most of the wood shaving out pretty quickly, but I haven’t lost any more eggs due to collision since then.

I have seen a few more cracked eggs, though… 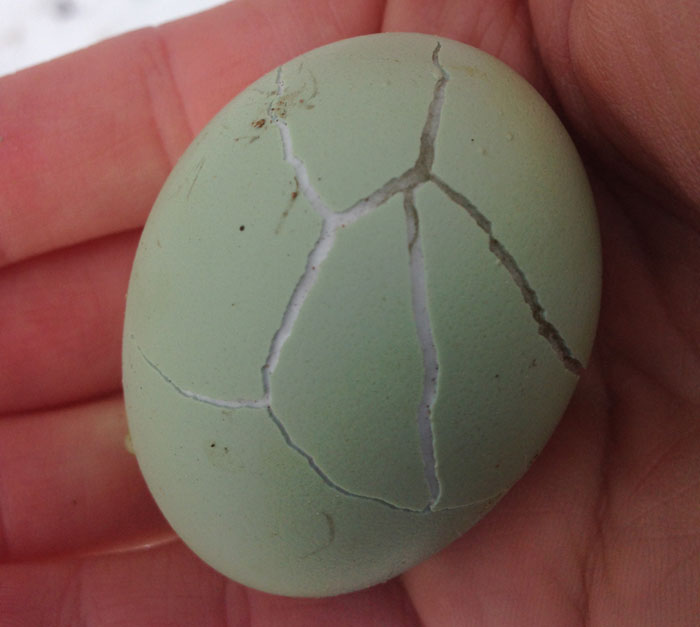 At first, I assume the above egg cracked because she had let it drop farther when laying it.  However, it was probably about 10° outside at the time, and when I picked it up I realized that the thing burst because it froze solid.  Carpet won’t fix that.  I had to bring it inside to let it thaw in order to crush it to give it back to them.

Some time has passed, and now I’m generally getting 3-5 eggs a day!  There for a while I started eating three eggs a day for lunch, because, well, that’s about as cheap (cheep) a meal as I could do right now.  And I was often frying them in some lard that my buddy Walter gave me, so it’s as organic as it could be, too.  Then I started realizing I’d probably burn myself out too quickly, so I only do that a few days a week now.

As you can see from the image at the top of the post, my eggs come “Easter Ready” – so I didn’t have to dye any eggs in order my wife and me to have an Easter Egg Hunt in our yard.  You’ll probably notice that there are some “blemishes” on my eggs, and that’s because I don’t wash them until right before I cook them.  They naturally come out with a protective coating that keeps them fresh for six months or more, and washing them can take that coating off.  (Commercial egg farms tend to wash their eggs in a bleach solution, which can actually seep through the shell.  I think I’d rather have a bit of chicken poop to wash off the shell than bleach inside the egg white)

I also have a variety of sizes!

It’s kind of hard to see in the picture, but the far left one is quite a bit bigger than the far right one.  The one on the right is from my silkie bantam, and I’m pretty sure that’s as big as her eggs are going to get.

A lot more has happened in the last couple of months (spoiler alert: I have honey!!), but I won’t make this the Neverending Story in a sing post…  I’ll try to update soon!

3 thoughts on “Eggcellence: Just in Time for Easter!”