Let me preface this with the following:

I am an idiot.

I’ve been thinking about getting bees for over a year now, and have been reading and researching a good amount in that time.  I attended a weekend seminar on beginning beekeeping, and feel like I’ve got the basic understanding down.

A few weeks ago I bought two complete hives (no bees), and all the equipment I’d need to go with them.  I then tried to find some bee packages to order, but to my dismay, there were none available.  After about a week, I decided I’d spend the extra money and buy some nuc colonies, but they wouldn’t be ready for another month or so.

I figured I’d use the time for more preparation, so I painted my hives, assembled frames, prepared the location, etc.  But my anticipation has been growing and growing…  I can’t wait to get them started!

My mother-in-law has a farm about an hour south of us, and my wife and I went down there this past weekend for a bridal shower – excuse me, a Tea.  As you might assume, I didn’t go to the shower (Tea!), but they did need a hand moving some furniture at the house that it was held, so my brother-in-law, Nate, and I went to lend some muscle.

Alas!  My mom-in-law recently had 7 bee hives placed on her property (they get a prime location with tons of pollen, and she’ll get pollinators and most likely some honey), and they were screaming “Come take a look at me!” in their steady collective buzz.  So, of course I wasn’t going to pass up an opportunity to finally get a look at what my colonies would look like soon enough.

Nate and I drove close to the hives, and I proceeded to approach the hives – sans any equipment.  He wisely kept his distance.  At first, I just walked along the front of them, not getting too close, because I didn’t want to cast my shadow on the entrances.  They were busily moving to and fro, clustering around the entrances, and…  well…  doing whatever bees do.  Part of which was checking me out as well – I had some swirling around me and landing on me, which is normal.

That wasn’t enough, though, so I went around behind the smallest of the hives and took the outer cover off, then the inner cover.  Because it was such a small hive, there really wasn’t much to look at – I could only see just a few bees at the top of the frames.  I replaced the covers.

But I wasn’t satisfied.  I’d seen all the pictures and videos I cared to see – I wanted the real deal!  So, after successfully looking in the small hive, I decided to check the one next to it, which was about three times the size of the first.

Outer cover comes off easily.  The inner cover is slightly sealed shut – which is completely normal, but I don’t have a hive tool to pry it open too easily.  Instead, I just work it a bit, and it eventually comes off.

Bees!  They are all over the place!  It’s exactly what I was hoping to see, an I just stood there for 30 seconds or so, admiring their activity.  A few bees decide to flurry with activity in the thinning spot in my hair, I assume because there was a lot of salty sweat available to them.  Around this same time, Nate decided he’d had enough of the bees and quickly made his way back to the car.

I don’t know what really occurred at that point – maybe because I was starting to get a bit nervous about the bees making the top of my head a mini wrestling ring, or because I simply just realized that I don’t have any protection, nor did I smoke them to keep them calm.  Either they started buzzing louder to tell me to go away, or I just heard their buzzing amplified in my now nervous ears, but I felt like I was overstepping my bounds.  I tried to replace the inner cover without smashing any, which was difficult since I didn’t have a brush to move the bees off of the edges.  I think that was when I was first stung.

With one sting, I knew that more were on the way, and I wasn’t excited about that since there were so many on my head.  I basically let the inner cover lay where it could lay, without worrying if a bee or two met it’s untimely end.

And then I ran.

I ran past the car, and then again that same length, and then again even further.  Nate is yelling at me that I’ve got a bunch on my back – but what I was thinking about at the time was the bees crawling on my face and head.  I was trying to shoo them away, rather than smack, knowing that the angrier they got, the more stings I would enjoy.

Luckily, the stings didn’t hurt as bad as I remembered (I don’t know the last time I was stung), but I was still in a bit of a panic because of the sheer number.  I thought about taking off my shirt, but then I realized that that was basically saying “Here – why waste your time on the little skin exposed on my head, when you have this gigantic target?”  After a while, I got most of them off.

I walked over to Nate and told him to blow the bees that were on my head, to softly urge them to leave rather than force them.  I thought all of them were gone, so we got in the car and shut the doors.  I sat there, trying to catch my breath, both of us laughing a bit hysterically.

Both of us jumped out of the car and ran around a bit, opening the back doors, trying to get the bee out.  After we were successful, we jumped back in.

Then I realized that I never put the outer cover back on the hive.

Nate made the suggestion that we go back to the house to regroup, and maybe give them some time to calm down.  I didn’t know what else to do in that moment, so I felt like that was a pretty good option.

We walked in the house through the kitchen, where our wives were also a flurry of activity trying to prepare for the shower (TEA!).  We nonchalantly passed them by, and went upstairs to try to find anything that would work as a bee veil, and settled on a dirty clothes bag and hat.  I then grabbed a thick shirt and gloves.

With Nate momentarily distracting our wives in the kitchen, I passed by undetected with my new gear, and we made our way back to the scene of the crime.  This time, it was fairly uneventful.  With homemade veil adorned, I walked over to the hive, carefully replaced the outer cover, and walked back to the getaway car.  I stopped for a moment to make sure I didn’t have any on me, and jumped in.

Again, mass pandemonium.  We jumped out and ran around until it was out.  We tried to jump back in, but the dog had taken the opportunity to sprawl in the front seat, since we were too preoccupied to keep him from jumping in.  After getting him out, we jumped back in, and walked through the house like we didn’t have a care in the world.

I didn’t tell my wife until around dinner, so that I wouldn’t be the topic of conversation at the shower (TEA!  TEA TEA TEA!), and a good laugh was had by all at my expense.  At the time, I only knew of about 4 stings – though during dinner, I found another stinger in my head just above my ear.

I was happy to know that I’m not too allergic to bees, because the stings that I knew of weren’t swollen or hardly irritated.  However, on the drive home, I had to swap seats with my wife, because I wasn’t feeling too good.  I ended the night with crazy convulsive chills, and then a 101.7˚ fever.

When I woke up, my fever was down, but I got a wonderful surprise in the mirror. 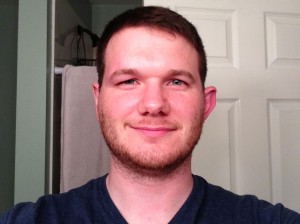 Perhaps it’s hard to see, but I have a swollen ear and brow.  We counted almost 20 stings!

My wife and I had a baby shower to go to, where I garnered the nickname Sloth (from the Goonies) because of my swollen face.  Then we had dinner with friends from church, who also enjoyed my antics.

Do I regret it?  Nah.  I’m glad to know that after 20 stings, I might have a fever and little sleep (all of which included dreams of bees), but I’ll still be ok.

I don’t think I’ll ever poke my head in a hive without the proper equipment, though!

It’s been almost a year since we moved out of our last home, and the renovation process for our new home is at 7+ months.  (Technically 9+ if you count the time trying to get permits.  And I count that time.)  I’ve been crazy busy for much of that time, but some of it, I just feel busy.  Not having a TV back in our house helps not waste time, but I still feel like time is just slipping away.

Unfortunately, I feel like our current culture is all about busy-ness and “progress.”  If someone isn’t running in a tizzy – if they’re relaxed – then we assume they have no aspirations, and they’re probably lazy.

Or maybe I’m just speaking from my own perspective, and no one else feels that way.

My hope is that I’ll be able to live off grid in order to not be constantly trying to keep up with the Jonses.  If I have no required expenses (besides property taxes, grrrr) because I generate my own power, pull water from my own well, and grow all of my own food, then I don’t need a huge salary or bank account.  If you have a paid off mortgage, you can live on way less.

In trying to slow down, I’m stressed because the process is taking too long!  A year after moving out of our last house, I assumed that we’d be settled, and we’d be ready for our garden and already be grabbing eggs from our chickens.  Those things are not even close at this point (Though I do have bee hives!  But no bees yet…).  But – in light of the intention for getting off grid, I’m trying to be comfortable in the process instead of wishing for some tomorrow where all my stuff is done.  Because all my stuff will never be done.

I’m definitely not saying that I want to be at a place where I have no ambition, and that I’m going to sit on my front porch in my underwear drinking piña coladas all day – not that I won’t ever do that.  But rather than I’d like to be at a point where I can be still.  Especially because it’s in those moments that I realize that God is holding the entire world together, not me.  And that’s a good feeling.